Disney Channel has ordered “Shake It Up!,” a buddy comedy centered around a teen dance show, created by Chris Thompson (“Laverne and Shirley,” “Bosom Buddies,” “The Naked Truth,” “Action”) and executive-produced by Thompson and Rob Lotterstein (“The War at Home,” “Ellen”). It stars 12-year-old child actress Bella Thorne (pictured above center modeling my favorite pettiskirts by Kaiya Eve) and 13-year-old Zendaya (pictured below). The multi-camera series will begin production in Hollywood, California, in July for a scheduled Fall 2010 premiere on Disney Channel. The announcement was made today by Gary Marsh, president, Entertainment, and chief creative officer, Disney Channels Worldwide.

Marsh said, “Newcomers Bella Thorne and Zendaya make for one of the most likable and engaging BFF duos we’ve ever seen. And while buddy comedies have been around since the start of television, what makes ‘Shake It Up’ unique is that this is the first time anyone has incorporated dancing into the underlying premise of a sitcom.”

The comedy series introduces two high-spirited characters, best friends CeCe Jones and Raquel “Rocky” Blue, whose dreams of becoming professional dancers are realized when they become background dancers on the most popular teen dance show, “Shake it Up, Chicago,” a gig they land thanks to their longtime and well-connected friend, Deuce. Between learning a wide range of new dance styles, navigating the backstage antics at the show (especially with their rivals, Tinka and Gunther) and their newfound social status at school, the girls are on their way to new and fun adventures, some that will test their friendship. 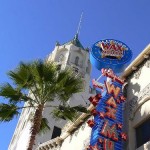 Starring are Bella Thorne as CeCe Jones; Zendaya as Raquel “Rocky” Blue; Kenton Duty (“Lost”) as Gunther; Adam Irigoyen (“Wizards of Waverly Place”) as Deuce; and Davis Cleveland (“Good Luck Charlie,” “Desperate Housewives”) as Flynn Jones, CeCe’s precocious younger brother. The series was created by Chris Thompson and will be executive-produced by Rob Lotterstein and Thompson. Rosero McCoy (“Camp Rock 2 The Final Jam”) choreographed the pilot episode.  “Shake It Up!” is a production of “It’s a Laugh Productions, Inc.”

Disney Channel is a 24-hour kid-driven, family inclusive television network that taps into the world of kids and families through original series and movies.  Currently available on basic cable in over 99 million U.S. homes and to millions of other viewers on Disney Channels around the world, Disney Channel is part of the Disney/ABC Television Group.