You are here:Home-CHILD ACTORS, Child Stars, In the News, THE BUZZ-Actress Turned Clothing Designer Elizabeth Hurley in Hot Water Over Allegedly Risque Kiddy SwimWear
Previous Next 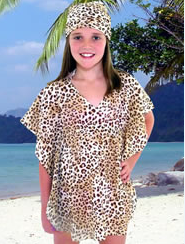 According to Britain’s Daily Mail, British child protection charity Kidscape is accusing Elizabeth Hurley‘s Children’s wear line of bikinis, tankinis, and beach cover-ups of sexualising kids (not to be confused with Hurley Girls swimwear and rash guards). Pictures below are of Child Models wearing these pieces on her website.  The line is for eight to 13 year olds and described as being “great for girls who want to look grown up.”

Kidscape director Claude Knights states, “It is very disturbing to see some inappropriate items in this swimwear range. The pieces that are very adult and which contribute to the sexualization of young girls – especially in the poses portrayed – do not take account of the child protection concerns that have been well-aired.”

Hurley’s team adamantly refuted these charges stating,”Our collections sell extremely well in (U.K. luxury retailer) Harrods and in numerous stores across America and the Middle East. Most of our customers are repeat customers who report that their kids adore the designs.” 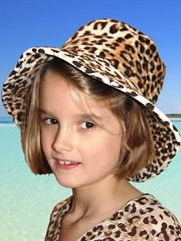 While we always support protecting our children, we question whether Kidscape is going overboard in this bathing suit bru-ha-ha?  We agree Elizabeth Hurley is breaking some fashion laws, but more because her designs are uninspired rather than risque and because of the overload of cheetah print on…well everything.  We absolutely agree Hurley’s beachwear styles are “older looking” but older as in “My-Grandmother-in-Miami-has-that-same-outfit” and not a lolita-ish, come hither way. We’ve seen bathing suits for kids that seem age inappropriate or are questionably photographed but because those lines aren’t “celebrity-owned” (hence headline-making) no one is attacking them. Moms, what do you think?

Kidscape works UK-wide to provide individuals and organisations with practical skills and resources necessary to keep children safe from harm. The Kidscape staff equips vulnerable children with practical non-threatening knowledge and skills in how to keep themselves safe and reduce the likelihood of future harm.

Kidscape works with children and young people under the age of 16, their parents/carers, and those who work with them.

Kidscape feels that this kind of work is vital given the frightening statistics that: