You are here:Home-Cautionary Tales, CHILD ACTORS, Child Stars, In the News, THE BUZZ, Then & Now-UPDATE: Teen Star Taylor Momsen Allegedly Suspended from “GOSSIP GIRL”
Previous Next 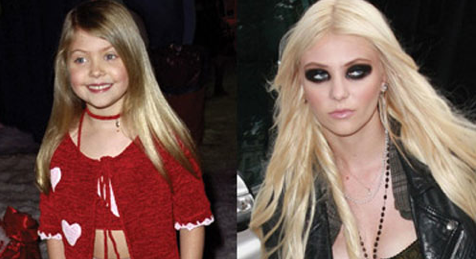 UPDATE:  According to Deadline Hollywood, Taylor Momsen has been suspended from “Gossip Girl”  indefinitely because of her “offscreen antics.”  Representatives for the CW and Warner Brothers did not comment, but Momsen is confirmed to miss at least 4 episodes, beginning with the show’s Dec. 6, 2010 midseason finale.  Momsen, who is credited as a series regular, has only appeared in three episodes this entire season.

Taylor Momsen, shown in the video below at age 3 in an adorable “Shake & Bake” commercial, made her first mistake starring as Cindy Lou Who in “How The Grinch Stole Christmas” (2000) because as all know, crazy hair photos live forever!  Just kidding.  Of course it was actually this role along side funny guy Jim Carrey and under the direction of Ron Howard (a former child actor himself) that put Taylor Momsen on the Hollywood map with a Blockbuster Entertainment Award for favorite female newcomer.

According to Starpulse, Momsen allegedly blames her parents for robbing her of her childhood, stating: “Everyone’s like, ‘Wow, why is [Taylor] upset and why is she so miserable about things?’ My parents signed me up with Ford at the age of two. No 2 year old wants to be working, but I had no choice. My whole life, I was in and out of school. I didn’t have friends. I was working constantly and I didn’t have a real life.”

Momsen is reportedly lashing out at her parents choice to put her in show biz, declaring they are the reason she is miserable. Seems like this really is a “Press Mistake” as there are numerous photos of Momsen on the internet, many of them with her dedicated momager Colette right by her side. Seems unwise to so harshly condemn and blame your parents for your “misfortune,” not because they gave birth to you, but because they currently accompany you everywhere you go and your “misfortune” is questionable at best.  Her statements probably also make for some awkward silences at the family dinner table. 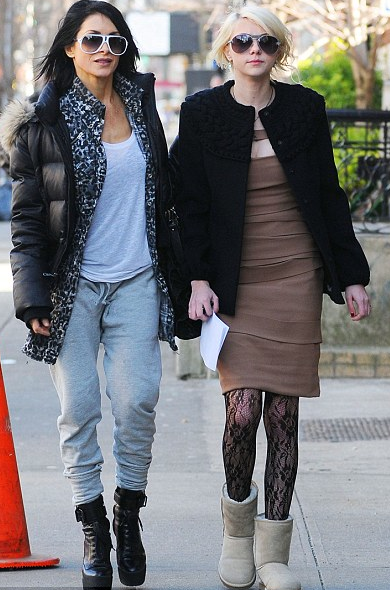 Press Mistake #2 is pissing off well-regarded and fearlessly sharp-tongued cast mates like Project Runway‘s Tim Gunn, who guest starred as himself in an October episode of  Momsen’s show “Gossip Girls.” While Gunn was on George Lopez’ talk show to promote his book Gunn’s Golden Rules: Life’s Little Lessons for Making It Work recently, he chastised Taylor for her on-set misbehavior, saying Momsen spent too much time on her BlackBerry and not enough time focusing on her job.  He told Lopez, ”We were doing a different take for every single line that she had. And she acted annoyed at the crew, and the director, and the producer.”Ouch.

When she’s not lashing out at her parents, cast mates, crew members and annoying Tim Gunn, the “Gossip Girl” TV star finds time to front the band “The Pretty Reckless,” and be spokes model for Madonna’s daughter Lourdes’ new clothing line, “Material Girl.” Mistake #3 would appear to be that Taylor could easily call it quits with the whole miserable show biz thing now that she’s an almost-adult but on the contrary her entertainment empire is growing and branching out into both music and commercials. 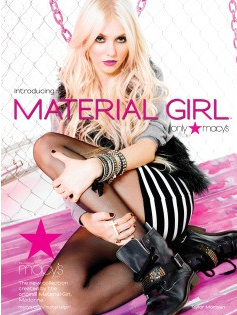 So are these really “Press Mistakes,” or rather part of some calculated strategy to make it into the headlines and stay in them long term, even if it requires that one say and do some fairly obnoxious things?  I’m guessing Momsen subscribes to the “Any press is good press” adage as many people unfamiliar with her show are now acutely aware of who she is.  Sometimes in Hollywood, that’s all that matters.