You are here:Home-CHILD ACTORS, Child Stars, In the News, THE BUZZ-Child Star Willow Smith Co-Hosts Oprah’s “The Most Talented Kids” Show
Previous Next 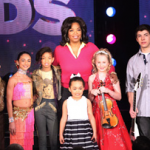 I almost hesitate to post this, not because I feel it’s controversial but because I’ve noticed HMB’s posts on Will and Jada Pinkett’s Smith’s child star kids Willow and Jaden aren’t the readers’ favorites. Compared to our casting updates, auditions notices and product review posts, the articles on the Smiths get fewer page views and more ambivalent responses. In other words, I get the feeling that more than a few of you don’t particularly care what the Smiths are up to.

Well here I go trying again! Yesterday’s Oprah show showcased a slew of talented kids, so naturally child star Willow Smith, 10, was a logical choice to co-host with Ms. Winfrey. She performed her hit, “Whip My Hair,”for the viewers and then musical heart throb Lenny Kravitz made a brief, surprise appearance.

Controversy finally ensued when several audience members, who were tweeting and blogging directly from the show, interpreted Willow’s demeanor towards Oprah as disrespectful. This is the same behavior that author Terry McMillan observed about the Smith Kids and tweeted on a few weeks ago which caused such a Twitter ruckus.

Personally, I don’t know. The Smith kids don’t bother me in the small doses I’ve seen on television and in film. What about you? Did you watch the show and if so, what do you make of Willow’s behavior? Do you think viewers are tougher on the Smith kids because their road to fame appears gifted to them as opposed to earned?