Dreaming of the Mouth-Watering Meals Served up in @ChefTheFilm?! We've Got the #RECIPES!

You are here:Home-CHILD ACTORS, Child Stars, In the News, THE BUZZ-Dreaming of the Mouth-Watering Meals Served up in @ChefTheFilm?! We've Got the #RECIPES!
Previous Next

Dreaming of the Mouth-Watering Meals Served up in @ChefTheFilm?! We've Got the #RECIPES!

The new comedy CHEF is expanding to more cities this weekend, and the filmmakers want YOU to join in on the fun. Now you can recreate the mouth-watering meals from CHEF in your own home and share with friends and family! 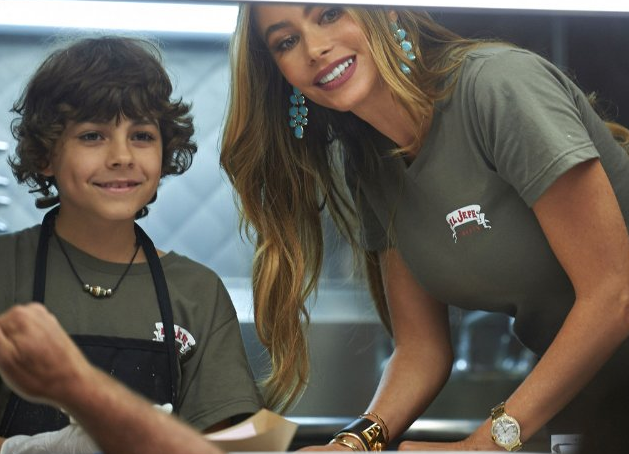 Emjay Anthony, repped by Coast to Coast, plays the son of Sofia Vergara and Jon Favreau.

When Chef Carl Casper (Jon Favreau) quits his job at a prominent Los Angeles restaurant after refusing to compromise his creative integrity for its controlling owner (Dustin Hoffman), he is left to figure out what’s next. Finding himself in Miami, he teams up with his ex-wife (Sofia Vergara), his friend (John Leguizamo) and his son (Emjay Anthony) to launch a food truck. Taking to the road, Chef Carl goes back to his roots to reignite his passion for the kitchen — and zest for life and love.

To help celebrate the expanding release of Jon Favreau’s newest comedy, we are excited to share three EASY recipes created by the remarkable food truck pioneer who helped make those flavorful scenes happen – Chef Roy Choi! Check out these CHEF-inspired recipes below, including the melt-in-your-mouth Cubanos recipe featured in the film!

Method:
Heat a large cast-iron griddle or panini press. Add the ham slices to the griddle and cook over moderate heat, turning once, until browned in spots, about 1 minute. Transfer the ham to a plate.
Generously butter the cut sides of each baguette and toast on the griddle over moderate heat until lightly browned, 1 to 2 minutes. Transfer the baguettes to a work surface and generously brush the cut sides with mustard. Layer the ham, pork, Swiss cheese and pickles on the baguette and close the sandwiches.
Generously brush the out-side of the sandwiches with butter and set them on the griddle or press; if using a griddle, top the sandwiches with a large baking sheet and weigh it down with heavy cans or a cast-iron skillet. Cook the sandwiches over moderate heat until they’re browned and crisp on the outside and the cheese is melted, 3 minutes per side on a griddle or 3 minutes total in a press. Cut the cubanos in half and serve hot.

Method:
In a bowl, whisk together all of the ingredients except salt, pepper and the pork. Whisk in 1 teaspoon each of salt and pepper. Transfer the marinade to a large resealable plastic bag and add the pork. Seal the bag and turn to coat; set in a baking dish and refrigerate overnight.
Preheat the oven to 425° and set a rack over a rimmed baking sheet. Transfer the pork to a work surface; discard the marinade. Fold the pork under itself, into thirds if necessary, and tie with string to form a neat roll. Season all over with salt and pepper and set it on the rack.
Roast the pork for 30 minutes, until lightly browned. Reduce the oven temperature to 375° and roast for 1 hour and 30 minutes longer, until an instant-read thermometer inserted in the center registers 160°; transfer to a carving board and let rest for 30 minutes. Discard the string before slicing across the grain. 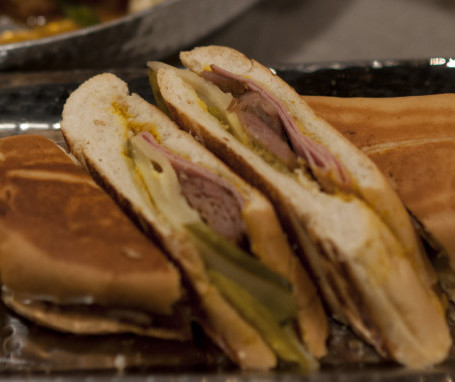 Method:
PREPARE BERRIES: In a large mixing bowl, sprinkle 1/2 cup of sugar over all the berries and let site for an hour or so.
MAKE CARAMEL DUST: Line a rimmed baking sheet with Silpat or coat with cooking spray. Bring to boil sugar and water over medium heat. Swirl in pan over high heat til sugar is dissolved, then cook til a caramel color, being careful not to burn. Do not stir. Pour onto prepared baking sheet to cool. Break up the caramel when hardened. Put in a food processor and pulse tilfinely ground. Run through a sieve to make dust.
MAKE CREAM: Whip cream to medium peaks with powdered sugar.

Fold in mint and two tablespoons of Grand Marnierto berries. Mix thoroughly.
Place berries in a serving bowl, top with cream and dust with Caramel dust.

Method:
Bring a large pot of salted water to boil and add the spaghetti, cooking until al dente, 8-10 minutes. Drain.
Heat olive oil in a large pan over medium heat. Add garlic and stir frequently until the garlic is golden brown. Add red pepper flakes, salt and pepper.
Add the drained spaghetti directly to the pan. Toss until spaghetti is thoroughly coated with the garlic oil.
Remove pan from heat, add the parsley and Parmesan and toss well. Check for flavor and adjust the salt if necessary. Squeeze lemons to taste. Garnish with more Parmesan.