Soccer Routes is the fastest growing soccer skills coaching company for children in Los Angeles. Why? Because Soccer Routes utilizes real, skilled coaches, and not glorified baby sitters, with no knowledge of the game.

Soccer Routes was born out of the vision of owner Adam Rose to deliver a fun yet educational company for the US market. Adam has coached more than 50 celebrity children since his arrival to Los Angeles.

“I couldn’t believe that America had nothing to offer in regards to actually teaching the game. Everything I saw was either silly singing activity companies or companies who focus on kids just running around for an hour. I wanted to bring real [soccer] coaching, get them on the ball, as parents deserved their children to have, helping them develop [their skills] correctly”.

Soccer Routes offers an array of classes, in many locations throughout Los Angeles; including general “Open” classes to Private classes, spectrum classes, birthday celebrations and camps.

“I wanted to reach out to the readers of Hollywood Mom Blog so many young actors can now genuinely add soccer as a ‘real skill’ on their resume for casting directors”.

Other goals of Adam’s include keeping children fit and introducing kids to the fastest growing sport in the nation! Rose believes Soccer Routes is the only place to truly learn the world favorite sport.

Call or email now to get your child into an open or private class. Trial class offered in the open locations also. Adam Rose and Soccer Routes is generously offering 10% off for all Hollywood Mom Blog readers! 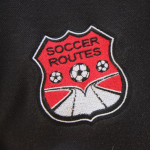 Adam Rose is a soccer coach, and owner of Soccer Routes. Having played at every level of the game in the United Kingdom, Adam moved to the United States to develop his coaching. With a background in child psychology, Adam has worked with children from ages 18 months to 18 years, since he was a teen himself. He is well-known as the “go-to soccer pro” for the children of celebrities.