You are here:Home-THE BUZZ-Chloe Moretz Won’t Be Dressing Up As “Hit Girl” This Halloween
Previous Next 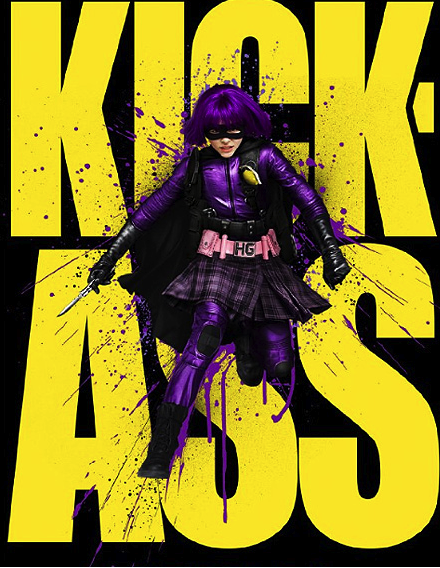 According to The Daily Record UK, teen star and HMB favorite Chloe Moretz, 13,owns one of the “Hit Girl” super hero costumes she wore in the hit film  Kick Ass, but thanks to a recent growth spurt it no longer fits. “I won’t fit into it for Halloween because I’m too tall now,” she said. “So I’ve put the costume in my closet in a box to keep it pristine. I’ll have my kids wear it when I’m older. I’ll just have to think of something else to wear [this Halloween] instead,” she says. Click here to see what she chose!

Not a problem for Moretz though as she reveals: “The suit was really uncomfortable.  You can’t bend in leather, and so, whenever I would go down, the crotch would rip open. By the end [of filming] they had to glue leather to hold everything together.”

With a slew of  tough girl roles under her belt at the tender age of 13 it’s surprising to learn that Chloe gets “freaked out” by her films and that she sometimes frightens herself.  In Let Me In, a remake of acclaimed Swedish film Let The Right One In, Moretz plays Abby, a young girl who befriends Owen, a lonely, bullied 12-year-old boy (Kodi Smit-McPhee from The Road).  Owen hopes she might become his girlfriend but as he soon learns Abby is a member of the undead, complete with an insatiable thirst for blood.

In “Let Me In,” Chloe recalls, “When I had the contact lenses and my fangs in, and all that gooey blood, it was crazy to see myself in the make-up mirror.  I have to remember, underneath it all, I’m just Chloe.”  Make no mistake. This is a horror film and Chloe’s character is a monster.  Unlike other vampire hits like Twilight, True Blood and the Vampire Diaries, there is nothing glam or sexy about this blood-sucker.  And the worst thing about drinking blood according to Chloe, is that it tastes awful.

“In one of the scenes, the director asked if I could drink the fake blood we use. I said, ‘Sure.’  [And] I actually drank it. That was a bad idea,” she said.  “It tasted like a mixture of corn syrup, rubbing alcohol, Pepto Bismol and dirt. It was really sick.  It was a good thing I only had to do that three or four times, whenever I killed a person in the film.”

“I hope I’ll terrify audiences enough to [say], ‘I don’t want anything to do with becoming a vampire. It’s not even cool any more, it’s just scary’,” she said.

About the films topical theme of bullying,   Moretz says, “Bullies should watch out,” she said. “You never know when that kid you’re tormenting has a vampire as a best friend.”

Chloe Moretz, the new it girl for all roles “teen girl,” is currently in the United Kingdom working with Martin Scorsese on the 3D fantasy Hugo Cabret, alongside huge talents Ben Kingsley, Sasha Baron Cohen and Jude Law.  She is also scheduled to shoot murder-thriller The Fields with Sam Worthington, the comedy The Devil And The Deep Blue Sea and the sequel Kick-Ass 2: Balls To The Wall.