You are here:Home-CHILD ACTORS, Future Stars, Momagers in the News, Parents of Child Actors, THE BUZZ-Hollywood Mom ANGELINA JOLIE Explains Casting Her Kids in @MALEFICENT
Previous Next

In my household we’ve been talking about Maleficent forever. Honestly, May 30 can’t come soon enough! Not only is our family friend Robert Stromberg making his directorial debut but we’re huge fans of the fairytale, Angelina Jolie and Elle Fanning!  Call us odd, but my family likes our fairytales served with a darker edge and by all accounts this film is going to deliver. 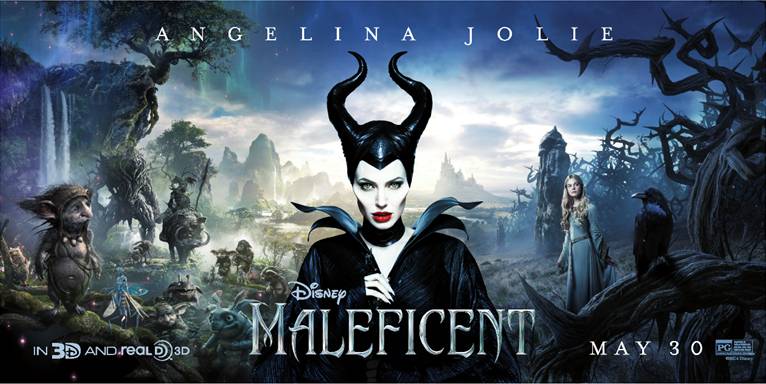 And it’s that darker edge that led Vivienne Jolie-Pitt to be cast in the film. Yes, we can officially add Hollywood Mom to Jolie’s never-ending list of achievements.

On casting her daughter Vivienne in Maleficent and how she and Brad Pitt feel about their children being child actors, Angeline Jolie tells Elle Magazine:

“For young Aurora, they needed a child who wouldn’t be fazed by the Mistress of All Evil hissing ‘I don’t like children’ in her face.  And my little Vivienne—we call her my shadow, because there’s nothing I can do to shake her. I can be tired, I can be grumpy, I can be in a terrible mood, and she doesn’t care. It’s ‘Mommy, Mommy,’ and she’ll cling to me,” Jolie says. “We knew that she would still do that thing, she’d still smile at me and insist that I pick her up. So we couldn’t really cast anybody else.”

Her children Pax and Zahara also appear in the film, in cameos in the christening/cursing scene.

Jolie tells Elle, “I asked Shiloh about being Aurora, and she laughed in my face. She said she’d be a horned creature.”

On her children acting in the future:

“Brad and I made the decision that we wouldn’t keep

[the kids] from sets and the fun of making movies, but we wouldn’t [glorify it either]—we wouldn’t make it a good thing or a bad thing. But I would really prefer they do something else. After two days of it, Brad and I were so stressed we never wanted to do it again.”

Maleficent fans can enter for a chance to win a trip to the world premiere of the film in the Maleficent “Embrace Your Inner Evil” Sweepstakes. Fans can enter by recreating Maleficent’s laugh and posting the video to Instagram using #MaleficentLaughSweeps. Official Rules: http://di.sn/MaleficentLaugh.

Stay on top of all the latest by liking the Facebook page!

“Maleficent” explores the untold story of Disney’s most iconic villain from the classic “Sleeping Beauty” and the elements of her betrayal that ultimately turn her pure heart to stone. Driven by revenge and a fierce desire to protect the moors over which she presides, Maleficent cruelly places an irrevocable curse upon the human king’s newborn infant Aurora. As the child grows, Aurora is caught in the middle of the seething conflict between the forest kingdom she has grown to love and the human kingdom that holds her legacy. Maleficent realizes that Aurora may hold the key to peace in the land and is forced to take drastic actions that will change both worlds forever.