You are here:Home-Casting News, CHILD ACTORS, THE BUZZ-CASTING NEWS: Child Star CHLOE MORETZ Lands Role of Child Prostitute in THE EQUALIZER
Previous Next

According to several media outlets, Chloe Moretz, 16, is rumored to be up for, or perhaps all ready cast in, the role of child prostitute “Teri,” the female lead in Sony’s “The Equalizer,” the feature film version of the classic television show, starring Denzel Washington. Moretz participated in a table read for the part and reportedly impressed everyone. The part was originally meant to be cast with an actor in their 20’s, but Moretz’ talent led them in her much younger, direction. Not surprisingly the role is being compared to Jodie Foster’s Oscar-nominated role of Iris in “Taxi Driver.”  The Equalizer is currently scheduled for April 11, 2014 release. 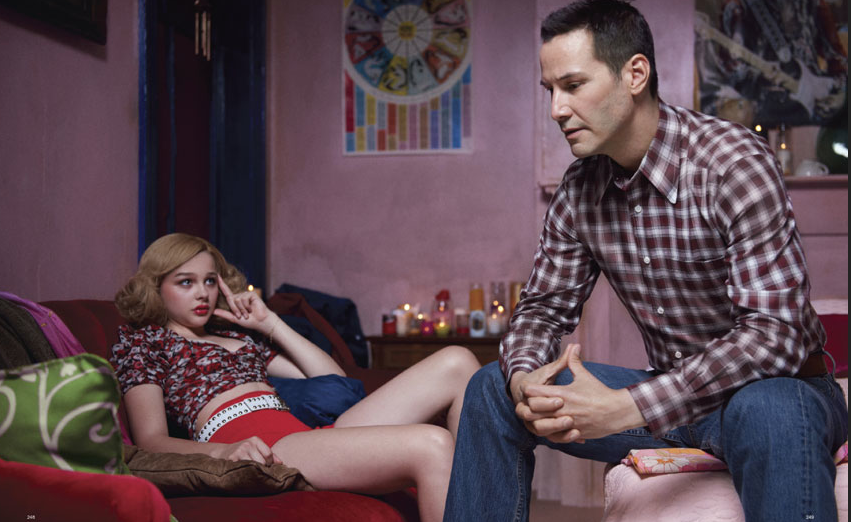 Premonition? In 2011, Moretz sat for BAZAAR with Keanu Reeves is a recreation of famous “TAXI DRIVER” movie stills.

Moretz can next be seen in the lead role of Carrie in the remake. Moretz told Nylon Magazine that she implemented Method Acting for this challenging role.

“I tried a new style of acting that I’ve never tried before. When I do a crying scene, I’m the type of actor who usually breaks right out of it afterwards, and I’m laughing and being silly. But with Carrie, I wanted to try staying in character and being in that dark space all day. I’m not very serious Method. It’s not like I didn’t talk to my family or go crazy and not eat, but with the director and the actors I was Carrie all the time on set. It was one of the best experiences I’ve ever had, but it was one of the darkest, and I’m terrified to see the movie because it’s the most vulnerable I’ve ever been.”

Carrie will be in theaters October 2013. Chloe is represented by William Morris Endeavor, 3 Arts Entertainment & BWR.