You are here:Home-CHILD ACTORS, Child Stars, In the News, THE BUZZ-Child Actors In the News: Griffin Kane Makes Film Debut in CONTAGION
Previous Next 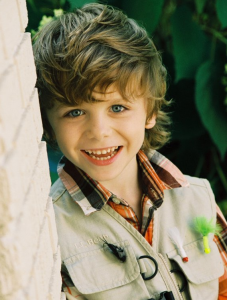 Griffin Kane, an 8-year-old from the small village of Wilmette, Illinois, is the lucky kid cast to play the child of Matt Damon and Gwyneth Paltrow in the action-thriller “Contagion” (think updated version of “Outbreak”) debuting Friday.  Similar to it’s predecessor Outbreak, this new film is also an action-thriller about a deadly disease spread, and also features a large cast of A-list movie stars: Matt Damon, Gwyneth Paltrow, Kate Winslet, Jude Law and Laurence Fishburne among others. Outbreak as you may recall featured Dustin Hoffman, Rene Russo, Morgan Freeman, Kevin Spacey, Cuba Gooding Jr., Patrick Dempsey, Donald Sutherland and a very naughty monkey.  According to Cineplex.com, a notable difference in the new version directed by Steven “I’m-on-a-sabatical” Soderburgh; Gwyneth Paltrow is the outbreak monkey. But I’m digressing…

Young Griffin Kane recently  told the Chicago Tribune, “I did scenes and I played with Matt Damon and I had my own trailer.”  While not filming, Kane and Damon would have Nerf gun battles and sometimes, during filming, they’d giggle in the middle of takes.  Kane who has not yet seen the movie, will attend the September 7th film premiere in New York City with his parents and walk down the red carpet.  Kane, who’s not used to seeing himself on screen said of the experience, “It’s really kind of weird.”

So how does an 8-year-old from Illinois’ North Shore get cast in a huge Hollywood feature film? It began just over seven years ago when Kane’s Mom, Kelly Keenan, who works in advertising, got her son into modeling at 6-months-old.  Then a few years ago, Kane graduated to auditioning for films.  Last summer he was cast in Contagion which was filming in the area and looking for local actors.

Since Contagion, Kane’s new career has been on a roll and he’s been cast in several in commercials for Kleenex, the Field Museum, and for Kmart’s Halloween campaign. Kane will be dressed as Captain America in the commercial.

When the Tribune asked Momma Keenan if she was fearful of the child actor curse she matter-of-factly replied, “We get asked that a lot, but we feel confident that we can guide him in the right way. I think for every screwed-up child actor there are so many actors that are doing just great.”