FREE TICKETS to Live Taping of DISNEY TV’s “KICKIN IT!”

You are here:Home-CHILD STAR STYLE, Free Tickets to Nick & Disney Show Tapings, THE BUZZ-FREE TICKETS to Live Taping of DISNEY TV’s “KICKIN IT!”
Previous Next

FREE TICKETS to Live Taping of DISNEY TV’s “KICKIN IT!” 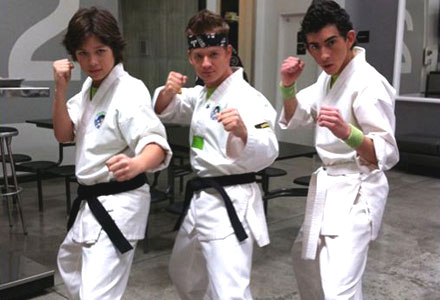 Free tickets to the live taping of Disney Television Show “Kickin’ It!” on Tuesday 4/19/11.  Minimum Age Requirement is age 10.

KICKIN’ IT! is a new live action comedy for DisneyXD set at the Bobby Wasabi Martial Arts Academy, a strip mall martial arts studio and worst dojo in the underperforming nationwide Bobby Wasabi chain. There, a ragtag crew of lovable misfits welcomes a hotshot skateboarder named Jack, who will teach a group of neighborhood goofballs about life, karate and how to just plain kick it.

The Bobby Wasabi Martial Arts Academy is in danger of closing until Sensei Rudy recruits Jack, the only person who can restore glory to Bobby Wasabii and vanquish their bitter rival The Golden Dragon. Jack reluctantly joins the dojo and meets his new crew – tough guy and slacker Jerry, awkward yet confident Milton and the lovable and uncoordinated Eddie. These underdogs soon realize their newfound friendship will take them places they never quite imagined.