You are here:Home-Momagers in the News, Parents of Child Actors, THE BUZZ-Justin Bieber’s Hollywood Mom Pattie Mallette Writes Memoir “NOWHERE BUT UP”
Previous Next

Justin Bieber’s Hollywood Mom Pattie Mallette, is known to most of the world as just that, Justin’s mom. However, Mallette is more than just the parent of the world-renowned pop sensation. She walked a rarely traveled road parenting her son through the unpredictable journey of fame. Her advice on raising child stars here.   Mallette shares her inspiring personal story for the first time in Nowhere but Up: The Story of Justin Bieber’s Mom. 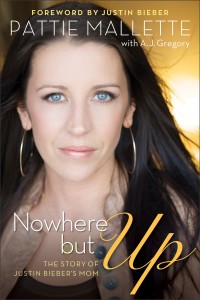 As a young woman and a single mom, she fought to rise above her painful life of abuse, shame, and poverty. Pattie hopes to encourage troubled youth, struggling single moms, and the broken-hearted through her story. She continues to expand her outreach to young women and youth (including her nearly 1 million followers on Twitter) while overseeing the management of Justin and his team.

Now Revell, a division of Baker Publishing Group, has acquired world rights to a memoir by Pattie Mallette, mother of pop music sensation Justin Bieber. Mallette will share her inspiring personal story for the first time in Nowhere but Up: The Story of Justin Bieber’s Mom. The book is slated for release on September 18, 2012.

In Nowhere but Up, written in collaboration with A. J. Gregory, Mallette shares heartbreaking details about the trauma, abuse, and addiction that marked her early childhood and young adult years. She reflects on a desperate search for love and acceptance that led to teenage rebellion and a suicide attempt at seventeen. And she recounts the remarkable way her life finally turned around when she found herself pregnant and facing an uncertain future as a single mom.

“Pattie’s story is a powerful example of courage and determination that will inspire anyone who has faced struggles in life,” says Jennifer Leep, editorial director for Revell. “She’s living proof that even in the darkest of places, there is always room for hope.”

Today, as the mother of an internationally celebrated recording artist, Mallette finds herself with unique opportunities to speak to women and teen girls facing the same challenges she herself has overcome. She hopes her story will give them the courage to take positive steps toward a brighter future. “I want them to see that no matter how desperate their circumstances may be, they can have hope for a better future,” says Mallette.

Mallette will support the release of Nowhere but Up with national media appearances and speaking engagements throughout the United States and Canada. She plans to donate a portion of the book’s proceeds to charity.