You are here:Home-CHILD ACTORS, Child Stars, In the News, THE BUZZ-Unlikely #NIKE Commercial #ChildStar Loses 30 Pds And Gains Self Confidence, Energy, Fame & Fans @nikestore
Previous Next

“I would never have changed my lifestyle if I was never in this commercial.”

Nathan Sorrell, 13, is best known as the overweight child in a controversial Nike 2012 Summer Olympics Ad viewed more than 1.6 million times on YouTube, but now that he has lost a whopping 32 pounds he’s gaining fame again.

Following his NIKE commercial, Nathan began a regimen of personal training and consulting with a nutritionist. He fully credits the Nike Campaign for prompting his lifestyle change. “I would never have changed my lifestyle if I was never in this commercial.” 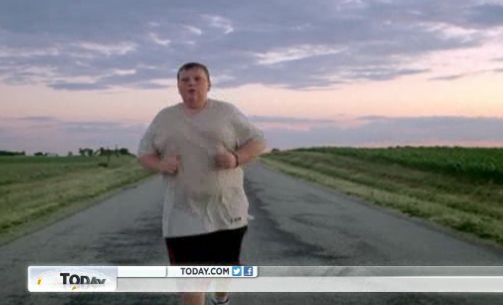 “Nathan was 5 feet tall and weighed 232 pounds last year when he shot the ad, which showed him slowly jogging down a country road, panting and sweating heavily, while a voiceover declared: “Greatness is no more unique to us than breathing. We’re all capable of it. All of us.”

When the commercial first aired, there was a backlash against the ad and many called NIKE exploitive for featuring Nathan.

At the time, Nathan was featured on the TODAY show, stating “I’m starting to learn, even if somebody completely physically fit did that commercial, they would still get, as they say, haters.”

Nathan, who plans to lose an additional  30 pounds over the next six months, says he still doesn’t like running but he loves playing basketball. His mother has implemented a new healthy eating plan for their entire family.

“I still can’t believe that was me then, and this is me now,” he told the Today show in a follow-up interview this week. “It just looks a lot different.”