You are here:Home-CHILD STAR STYLE, On the Red Carpet, THE BUZZ-Angelina Jolie Praises Child Star Thomas Horn But Brad Pitt Says The Jolie-Pitt Kids Won’t Be Child Actors
Previous Next

Angelina Jolie ran into the child star of Extremely Loud & Incredibly Close,Thomas Horn, age 14, on January 7, 2012 at the Palm Springs International Film Festival. She approached him on the red carpet and introduced herself to the dapper teen actor dressed in tuxedo and bow tie. 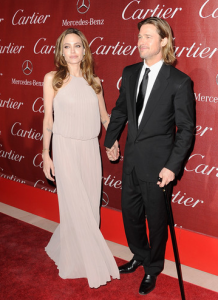 “Hey, I’ve heard you’re amazing,” Angelina told 14-year-old Thomas, “[It’s} very, very nice to meet you. It’s an honor.” She bent down to his eye level and asked him if he has done events like the red carpet before, and he admitted it was his first time.

“Are you excited or is it weird?” Angelina asked. “It’s weird, but exciting, I guess,” Thomas replied as his EL&IC co-star Tom Hanks looked on like a proud father.

Jolie then told Horn that her kids (Maddox, Pax, Zahara, Shiloh, Knox and Vivienne) are fans of his work.

“You should be really, really proud. You’ve done great things,” Angie told him. “My kids already think you’re cool, so I’ll tell them I met you and they’ll think I’m cool.” 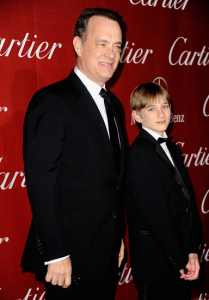 But while the Jolie-Pitt kids may think Thomas Horn is cool, it will be awhile before they can follow in his film-making footsteps if dad Brad Pitt has his way. According to Hollyscoop.com, Pitt’s open to the kids becoming actors — only not until they’re adults.

“Whatever they want to do,” Pitt he told the gossip Web site at the Palm Springs International Film Festival. “Whatever makes them happy. [But] not until they’re eighteen.”

Pitt and Jolie walked the red carpet at the film festival to accept the Desert Palm Achievement Award for his performance in Moneyball.