Seeking L.A. area KIDS, ages 12-14, passionate about and fascinated by science, Arduino, coding, creating, and hands-on challenges for the following:

Meccanoid Mayhem is a kids competition reality show, from Bunim Murry Productions, in which two teams of two middle school students each build their own Meccano Meccanoid. The teams then go head to head in a physical challenge centered around the Meccanoids. The show will have two hosts, who guide us through the building, programming, and competition. The goal of the show is to match the exciting capabilities of the Meccanoids with the imagination of the kids! 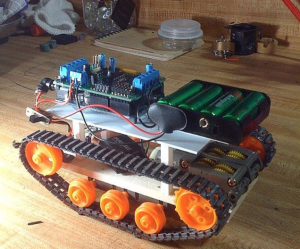 Since 1987, TV networks and viewers have looked to Bunim/Murray Productions for groundbreaking, unprecedented and unforgettable reality entertainment.

The Emmy® Award-winning company is widely credited with creating the reality television genre with its hit series “The Real World” (29 seasons for MTV). BMP continued to innovate with the first reality game show, “Road Rules” (MTV), in 1995; the first reality sitcom, “The Simple Life” (E!), in 2003; and the first reality soap opera, “Starting Over,” in 2003.

Whether documenting the lives and loves of the MTV generation or writing scripted dramas grounded in relatable life experiences, BMP is continually expanding its innovative body of work across primetime, syndicated and cable television, feature films, documentary films, digital and social media platforms.

Company Founders Mary-Ellis Bunim, who had worked in soap operas and Jonathan Murray, who had built his career in news and documentaries, first joined forces for “Crime Diaries” (Quintex), a dramatic detective series and “American Families” (FOX), a six-part reality series. Aware that MTV was interested in launching its own soap opera, Bunim and Murray pitched an alternative serial drama that combined the elements of soap opera and documentary a recipe for what is recognized today as reality television.The first series based on this original recipe, “The Real World,” launched on MTV in June 1992 and chronicled the lives of seven young people living together in a house. The series has since become a part of the world¹s cultural DNA.

In January 2004, BMP Co-Founder Mary-Ellis Bunim passed away. Under the leadership of company Co-Founder Jonathan Murray and Chairman and CEO Gil Goldschein, BMP remains committed to the ideals of creativity, adventure and excellence.

In March 2007, Bunim Murray launched BMP Films. The company’s first film, “Autism: The Musical,” premiered at the Tribeca Film Festival in April 2007 to critical acclaim and garnered audience awards at major film festivals across the country. The film premiered on HBO in March 2008 to rave reviews and won two Emmys®.

Over the past two decades, Bunim Murray has won numerous awards and industry accolades, including Primetime and Daytime Emmys, TV Guide Awards, New York Festival Medals as well as People’s Choice and Teen Choice Awards. Jonathan Murray and the late Mary-Ellis Bunim were inducted into the Television Academy of Arts & Science’s Hall of Fame in 2012.