Child Actor Cody Sullivan, 14, who hails from Fort Walton Beach, Florida, is on fire with recent bookings! He recently filmed a three-episode arc as Ernie on the new NBC hit series, Chicago Fire, about the lives of firefighters.  His episodes will air over November – December 2012.  Filming of the freshman show took place in Chicago, IL. Prior to this, Sullivan booked the 30 minute comedy pilot of Prodigy Bully with Missi Pyle (The Artist) and Mike O’Malley (Shameless, Glee) for Fox, playing Colby Collins, the entitled student at a school for gifted children.

Also released this month is Cody’s film project, The Measure of a Man, (on DVD) about a man who grows up in an orphanage and makes his mark on the world.  Cody plays Tommy, the fourth oldest of nine children in the family. 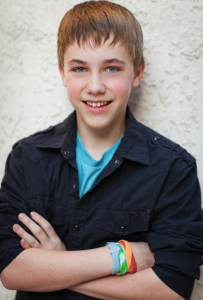 Sullivan knew he wanted to be an actor at 8 years old when he performed at The Emerald Coast Children’s Theater (Oz Theatre).  He knew before his first production Oliver! had wrapped that he wanted to be an actor.  Cody has appeared on Criminal Minds, The Daily Habit, and The Measure of a Man as well as played the Young Edward Fudge in the soon-to-be-released Hell and Mr. Fudge.

In addition to his pursuit of acting, Cody authored his first book, “Joey and Me” at age 10.  When he isn’t on set pursuing his dreams, Cody enjoys reading, baking, playing guitar and piano and time with friends.

Cody is represented by Paradigm (Theatrical) and CESD (Commercial) and Gregg Edwards Management.