If there is any doubt why a law protecting minor models is needed, read the all to common story of model Alise Shoemaker who was encouraged to drop out of highschool by the agency that represented her (which she did) and then subject to sexual advances by a fashion designer now serving 59 years to life for multiple counts of rape and child molestation of her fellow child models.

Under the new NY law, people who employ models are required to ensure the following:

The first effects of the new law will be seen at New York Fashion Week in February 2014, as the law will likely discourage designers from using extremely young models (16 and Younger) in their shows. The new law places limitations of the number of hours young models are allowed work, as well as how late and how often they can be used.

While designers tend to use models in their early 20s, it is fairly standard practice for models to be scouted and begin their careers when they are much younger. The Council of Fashion Designers of America has urged its members to set a minimum age of 16 for runway models, while the Model Alliance is pushing industry reforms such as the addressing of sexual harassment claims, more transparent accounting processes and better access to health care. 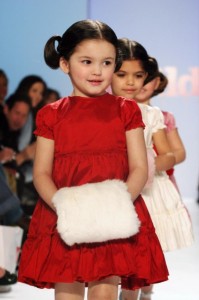 At a press conference earlier this week, model Coco Rocha joined Sara Ziff, a former model and founder and executive director of the Model Alliance, to talk about the passing of the new law.

“Having once been a child model myself, I know all too well that, up until now, a large underage workforce has lived and worked under very little legal protection in twenty-first-century New York,” said Rocha. “I’m so excited to see us make a huge step in the right direction, and I’m thrilled that I’ve been able to be a part of such a momentous moment which is sure to change the future of our industry for the better.”

Susan Scafidi, founder and academic director of the Fashion Law Institute at Fordham Law School, added: “This is a major step for minors, made possible by the convergence of two social trends; concern over children’s welfare, and the increased recognition of fashion as an art form – thus models as performers.”

In the guidelines issued to designers so that they can familiarize themselves with the new law ahead of its implementation, Scafidi noted: “The easiest way to avoid fees, paperwork, monitoring and potential penalties is simply to use models 18 and over — and to ask the agencies and casting directors with whom you work to assist you in checking models’ ages.”

Employers who violate these laws face fines starting at $1,000 for the first violation and up to $3,000 for the third. After that, they can lose the privilege to employ child models.

Scafaldi said, “No one wants to be the fashion house that is stuck in the headline: “So-and-so violates child labor laws.”