You are here:Home-CHILD ACTORS, Child Stars, In the News, THE BUZZ-CHILD STARS: Emma Rayne Lyle in WHY STOP NOW With All-Star Cast
Previous Next

Why Stop Now (formerly known as Predisposed at the Sundance Film Festival) follows a dysfunctional day in the life of piano prodigy Eli Smith (Jesse Eisenberg) as he helps his addict mother, Penny (Melissa Leo), his socially awkward sister, Nicole (talented child star Emma Rayne Lyle) and her sock puppet alter ego, Julio.  To complicate matters, Eli must enlist assistance from two hapless drug dealers, Sprinkles (Tracy Morgan) and Black (Isiah Whitlock Jr) on the same day he has a once in a lifetime audition for a prestigious music program. Events spiral comically out of control as this gang of misfits faces the mistakes of the past, the challenges of the future and the possibilities of love. 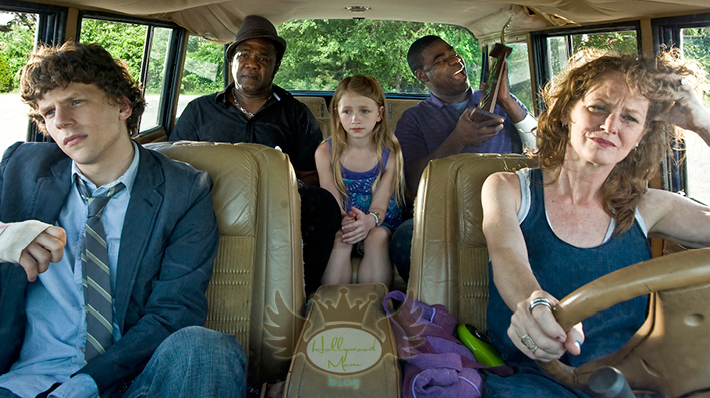 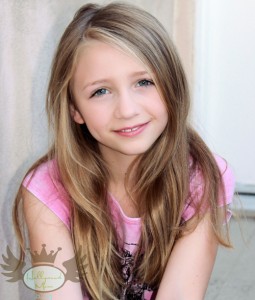 It’s fitting that Lyle is one of the stars of  Why Stop Now as “Why stop now has become this child star’s personal mantra over the last few years.  Only eight years old (turning 9, August 26, 2012) and this is Lyle’s seventh film release and she has worked with Academy Award winning actors, directors and producers – including Harvey Weinstein – the godfather of film.

Emma is best known for her role as Emily Reddy in Sarah Jessica Parker’s comedy, I Don’t Know How She Does It (2011)  but she’s had three more films released in 2012, while managing to guest star on two dramatic television shows.  “I love acting.  I love everything about it. I like learning my lines, preparing for the role and meeting all the new people on set.  I love to be in front of the camera.  I think the reason I like to act is I really like pretending to be someone else.  I always get the dramatic roles.  I like knowing and experiencing what it is like to be a different person and when I am acting I get to be different people and experience their lives.”

One of Emma’s favorite moments in Why Stop Now is the scene in the back seat of the car with characters Penny, Eli, Sprinkles, and Black. The motley crew assembles to pick up Emma’s character Nicole from school.  Nicole, it’s revealed, has a very unhealthy attachment to her ill-mannered sock puppet named Julio.

Emma tells HMB, “I kind of play two characters in this movie.  I play Nicole, the little girl who speaks soft and sad.  I also play Julio, the socket puppet who is mean and speaks in a raspy voice. I play these characters at basically the same time and we have conversations back and forth together.  I loved [creating] my own voice for the character.”

In this car scene, Nicole harasses Sprinkles (Tracy Morgan) and disrespects Black (Isaiah Whitlock Jr).  According to Emma, it’s one of the funniest parts of the movie. Emma says, “It was so darn hot in that car! We were filming in June and there were five people squished together.  While Jesse told jokes and stuff in the front seat, I was right in the middle of Tracy and Isaiah. I was sweating to death but Tracy Morgan took care of me.  He was like ‘Hey…hey you….hey you! Get a fan for this little girl.’  He said it in that tough voice that he has.  He got the fan for me and he was like, ‘Here you go Em.’  So I fanned him too while he ate BBQ pistachios. I never even heard of those before.  Tracy liked to mess with people and that was really funny.” 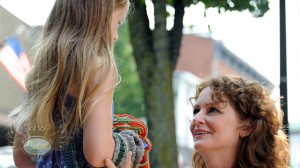 Emma learned from her other talented co-stars as well.  Playing opposite Academy Award winning actress Melissa Leo (The Fighter) was no small feat, as Emma and Melissa filmed strong emotional scenes together.  “Watching Melissa prepare for her scenes was awesome and I learned a lot from her,” says Emma, “She said I had good instincts. She has a lot of techniques to get her where she needs to be emotionally.  I recently applied one of those techniques on an audition. Working with Melissa was a great experience for me.  She is not only a great actress, she is very nice person.”

Emma’s older brother in the film is played by talented Jesse Eisenberg, best known for his break through, Academy-nominated performance in The Social Network. According to Emma, “Jesse Eisenberg is very smart.  He also very nice and very soft spoken.  It’s kind of like he’s still a little kid.  I was playing WII boxing during a break and he and Isiah watched me play.  I think it was the first time he had ever seen the WII. Jesse is a very talented actor and I’m really lucky to have gotten the chance to work him.”

As it turns out, Emma’s Mother Nyna wasn’t even planning to take her to audition for Why Stop Now.

Nyna recalls, “When Emma was initially called in to read for the role, I told her agent, Nancy Carson, that we weren’t going to go [to the audition] because it was casting local hires only. I had already been in and out of New York six times in the prior week. We lived in Virginia at the time, so it was quite a haul. But Emma’s agent said, ‘No they really want to see her.’” 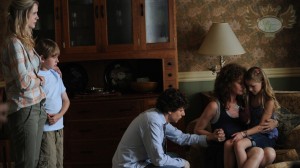 What neither Nyna and Emma knew was that while Emma was working on the film Return, the show’s set decorating leadman (and soon-to-be Why Stop Now co-director) Phil Dorling, had spotted her ans was all ready envisioning Emma in the role of Nicole.  Nyna tells HMB, “I didn’t find this out until after the audition. Phil called to tell me how happy he was that Emma booked the role [and that] he had considered her for the part almost a half a year before and was really glad that the producers and the other director also thought she was the right one for the role.”

Working with screenwriter/co-director Ron Nyswaner (Philadelphia) was a highlight for Emma. “Both Ron and [producer] Neda [Armian] are so nice,” she says.

Emma met with co-director Phil Dorling over the course of several weeks but it was ultimately Armian who had the final say in choosing Emma to play Nicole.  “I’m really glad Neda chose me,” Emma shares, “I was up for two other roles, but this is the one that I really wanted.  I really loved Nicole’s character.  She is such an unusual character and that is why I liked her.  I don’t like just playing a little kid who is just there to show that the parents have a kid.  I want to play a kid who means something to the film.”

Emma is represented theatrically by the Osbrink Talent Agency in Los Angeles and the Carson-Adler Agency in New York. Earlier this year she won the Young Artist Award in 2012 for “Best Performance in A Feature Film- Actress Under Ten” along with The Descendants actress Amara Miller.   You can learn more about Emma on her website: emmaraynelyle.com

Eli (Jesse Eisenberg) has the once in a lifetime opportunity to audition for a prestigious piano program. But if selected, the program would force him to move away for a year. He has a problem.  He takes care of his little sister Nicole, (Emma Rayne Lyle) because his mother Penny (Melissa Leo) is a drug addict.  In order to make sure that his home and sister will be okay, he needs to get his Penny into rehab so she can get clean and sober to take care of the home, herself and Nicole.  But things are never easy in the movies and rarely easy in life.  When Eli takes Penny to rehab, they won’t admit her because she is not on drugs. Due to an unusual loophole in the rules of the healthcare system, if Eli can get Penny high, then rehab will admit her.  That is where Sprinkles (Tracy Morgan) and Black (Isaiah Whitlock Jr.) enter the story.  Events spiral comically out of control as this gang of misfits faces the mistakes of the past, the challenges of the future, and the possibilities of love.