Philippines’ Child Actor Barbara Miguel, age 10, won Best Actress in the Harlem International Film Festival in NYC for her work in Joseph Israel Laban’s film, Nuwebe. This is her second award for Best Actress. In 2012 Miguel won a FAMAS Award for Best Child Actress for her performance in  Migrante (2012). 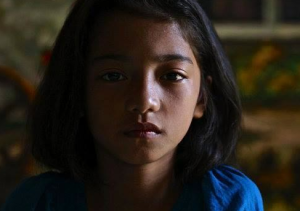 Nuwebe is the controversial story of one of the youngest mothers in Philippine history and Miguel plays the lead character.

You can watch portions of the trailer here, but as you would suppose, this film contains graphic violence, rape and sexual situations.

The film was inspired by the actual story of one of the youngest mothers in Philippine history. Krista (Barbara Miguel) was only 9 years old when she got pregnant. Her mother believes that she was impregnated by malevolent supernatural creatures called “nuno sa punso” but the real story will prove to be more complicated than it seems.

Nuwebe is produced by award-winning Filipino producer Ferdinand Lapuz. He served as Producer/Executive Producer on a number of Brillante Mendoza’s films such as The Aeta Teacher, Slingshot and Serbis.