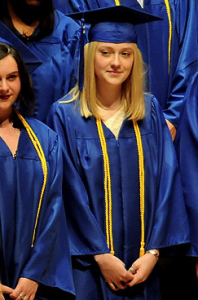 It seems like only yesterday the movie-going public discovered this petite, blonde moppet in “I Am Sam,” but on Monday afternoon, Child Star Dakota Fanning, 17, graduated from Campbell Hall Episcopal High School.

Despite her busy filming schedule (The Twilight Series, Hounddog, Runaways, The Secret Life of Bees) Fanning was a real high school student who participated as a cheerleader and was crowned homecoming queen two years running.