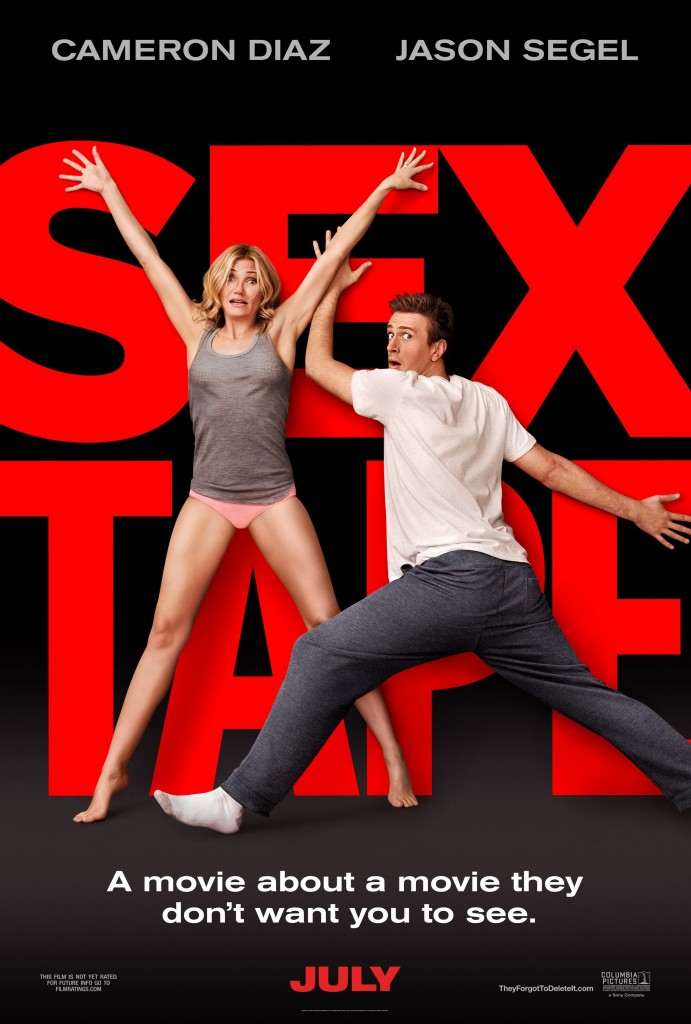 One Sheet for SEX TAPE

On Wednesday July 9th,  the night before the world premiere, Columbia pictures previewed the romantic comedy Sex Tape and Hollywood Mom Blog was there to catch all the action!

Hollywood Mom Blog met with director Jake Kasden and stars Jason Segel and Cameron Diaz to get the behind-the-scenes scoop on one of this summer’s funniest movies, along with details about the film’s three child actors: Giselle Eisenberg, Harrison Holzer and Sebastian Hedges Thomas. 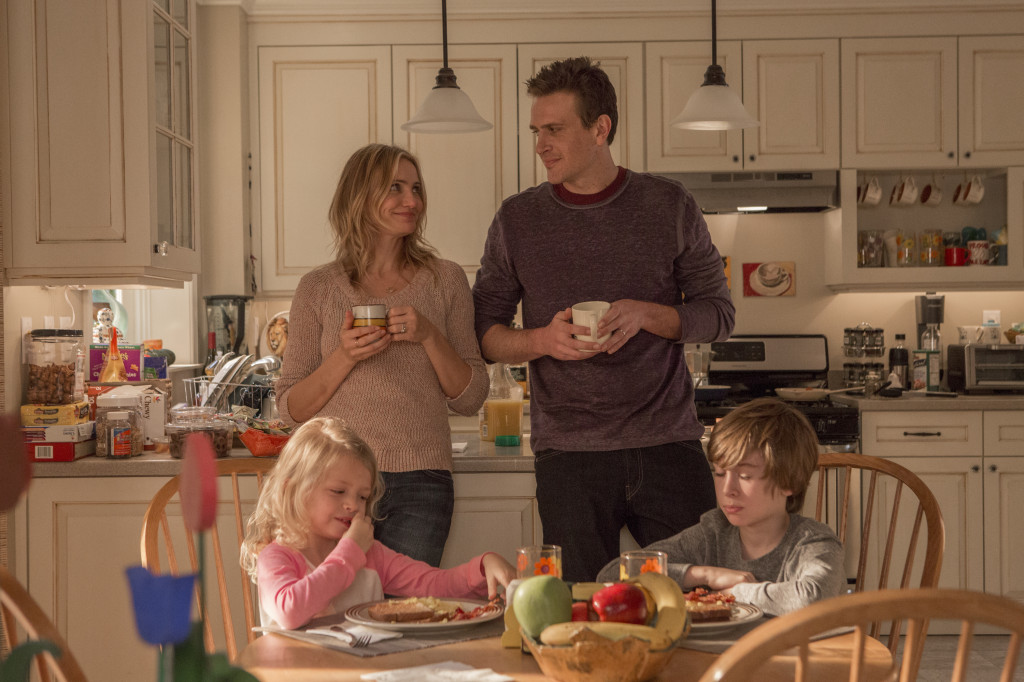 This outrageous comedy follows aspiring Mom Blogger Annie (Cameron Diaz) and her husband Jay (Jason Segel) as they navigate their way through a marriage gone stale.  In a misguided attempt to spice things up, the over-taxed parents decide to make a sex tape while their three kids spend an overnight at grandma’s house.  But when a technological mishap syncs the meant-to-be-private video to their friends and family, Annie and Jay go on a hysterical adventure in an attempt to retrieve every x-rated copy before being exposed in all their glory.

Director Jake Kasden sat down with HMB to discuss the challenges of making what may at first glance appear to be a risqué film: “This movie is about a couple trying to sort of work out their relationship and their life and their sex life and there was really funny material in that,” Jake said. “The way we wanted to treat this relationship and this couple is like they’re really in it together and you can sort of feel that. It’s kind of outrageous what they end up doing but they do it for all the right reasons and we always said we want to be rooting for them to make a sex tape, we don’t want to be judging them!” 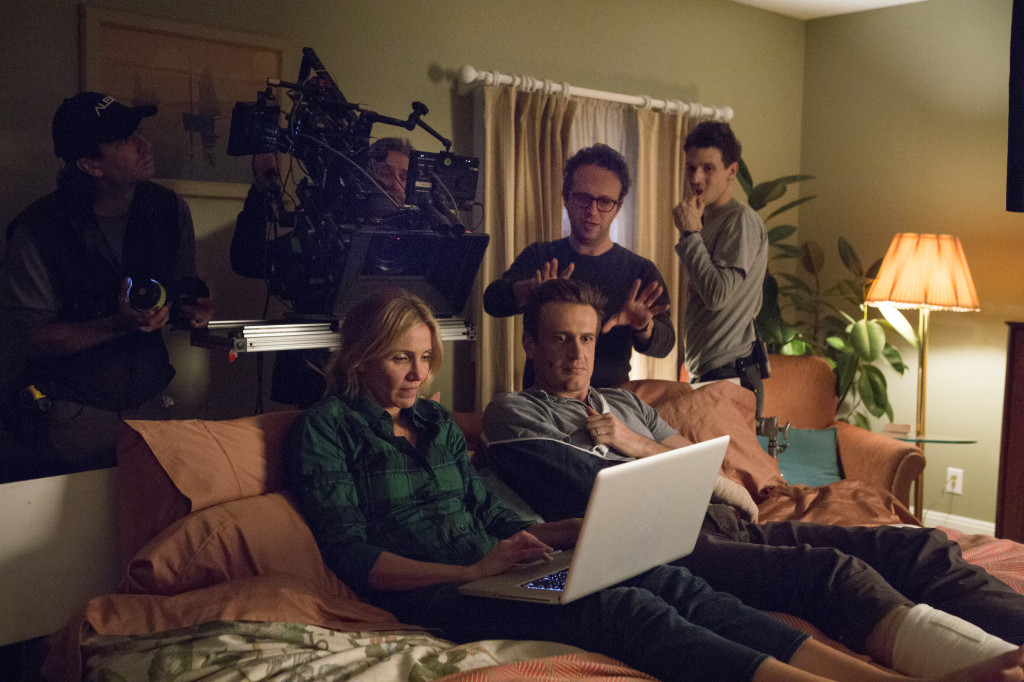 Of course we at Hollywood Mom Blog want the inside scoop on the three child actors who each had their fair share of screen time in this comical adventure. Jay and Annie’s children are played by the adorable Giselle Eisenberg and the charming Sebastian Hedges Thomas. Up and coming teen Harrison Holzer tackled the role of Howard in what surprisingly may be the funniest role in the film! Director Jake Kasden was quick to sing the praises of all three child stars when he opened up about working with young actors on the set of a film intended for an adult audience.

[Jay and Annie’s] two [younger] kids were just completely adorable. We were always kind of protecting them from the story, to whatever extent we could. When we would do a read through of the script they would come and go out of the room.  Sebastian, he’s a little older, so he’s a little more savvy [and] he could understand what was happening a little more than [Giselle] who I think sorta didn’t really understand at all. You know, we were just careful with what we did in front of them. But they were just so good and we were always so thrilled to see them coming and that’s not always how it is with child actors.

Kasden continues, “And then Harry (Harrison Holzer), who plays Howard, was just this unique little comedy freak. He very fortunately dropped in our lap like right at the last conceivable minute and it was a funny thing where we were just having a really hard time finding a kid who could sort of convincingly sell all of that [sic] and still be able to laugh at it and seem like a bully and just be funny.  We just kept saying ‘We just have to see a few more kids,’ and then he just walked in in New York and he owned it and we were like “Wow, there it is! That’s Howard!”

While discussing how much of the film was straight from the script versus improvised, Kasden revealed that Cameron Diaz and Jason Segel weren’t the only two comedians on set:  “The kids could improvise! All three of them! The little girl, the little boy, and Harrison were all weirdly solid improvisers! Harrison actually improvised some of the raunchiest stuff I’ve ever had in a movie! We were sitting behind the monitor and we were all laughing, he just really made us laugh! He was like 14, so he had just crossed over into that age where he could, well, you know – he’s a comedian!” 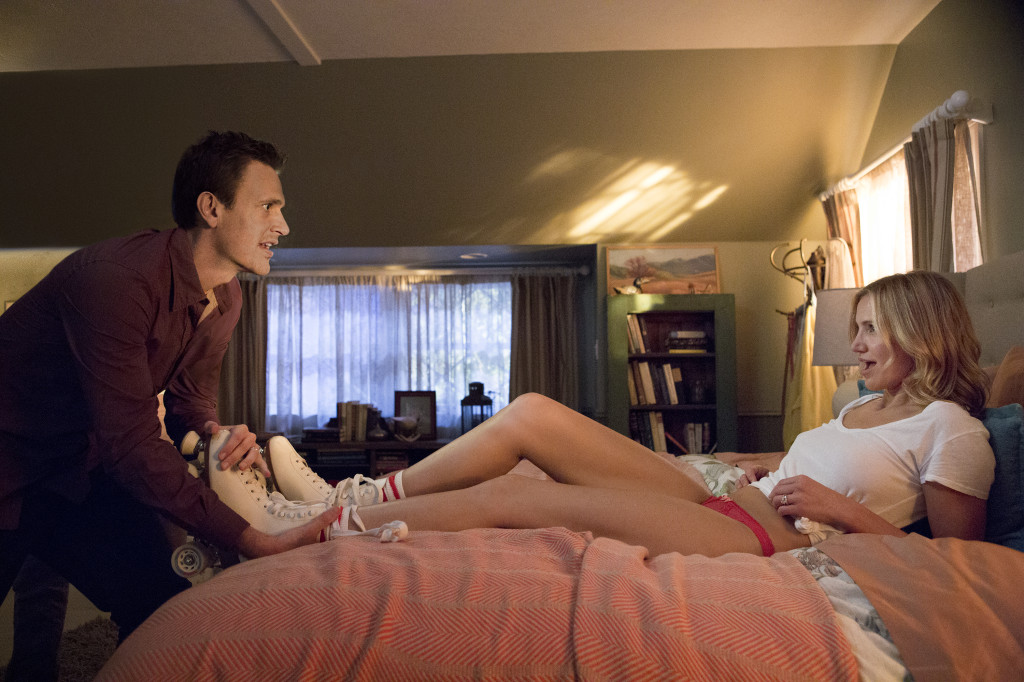 In an incredibly comical exchange with the film’s stars, Cameron Diaz and Jason Segel, both were upbeat and off-the-cuff about how their three child co-stars added to the magic of the filmmaking experience.

HMB: What was it like working with the three child actors?

Cameron: “He’s intense. He’s fantastic. That kid blew us away. It was not normal!”

Cameron: “And Giselle and Sebastian, they were unbelievable!”

Jason: “They were the best.”

Cameron: “They are such good little souls and their parents were so sweet. You never know what you’re getting with kids who act. You don’t know if they want to be there or if it’s just the parents know or if they really love it…”

Cameron: They were just really so sweet!

When the conversation turned to what it is like to spend every waking moment working so intensely with the cast and crew of a film only to have everyone abruptly parts ways when filming wraps, HMB wanted to know if Cameron and Jason had any advice for their young co-stars on how to cope with this very real aspect of life as an actor.

HMB: The child actors build those relationships when they’re on set for a month or so- What’s your advice to them as to how that part of life is that you’re together for a period of time and then you move on? How would you address that aspect with the child actors you work with?

After a bit of thought, Jason touched on the positive parental involvement our young actors require. “I think it’s really the responsibility of the parents to make sure that their child is capable emotionally of being able to handle it,” he stated in regards to the short-term relationships child actors may build with their adult co-stars.

Cameron started deep in thought, but brought the whole room down when she wrapped up with a strikingly honest thought: “ I think that it’s part of the job and it’s one of the considerations of letting children do a job that is for adults. Their relationship with the job at a young age is going to be very different- they can’t really negotiate the situation the same way, they’re not as emotionally capable of doing that… so I think that it’s the same way maybe as when their goldfish dies and you just tell them it went to Heaven?!”

The laughs just kept on rolling both on screen and off.  While the child actors certainly made a name for themselves, Sex Tape is without a doubt a film for adults (Rated R), so leave the kiddos with grandma and be sure to catch this hilarious summer flick in theaters nationwide July 18! 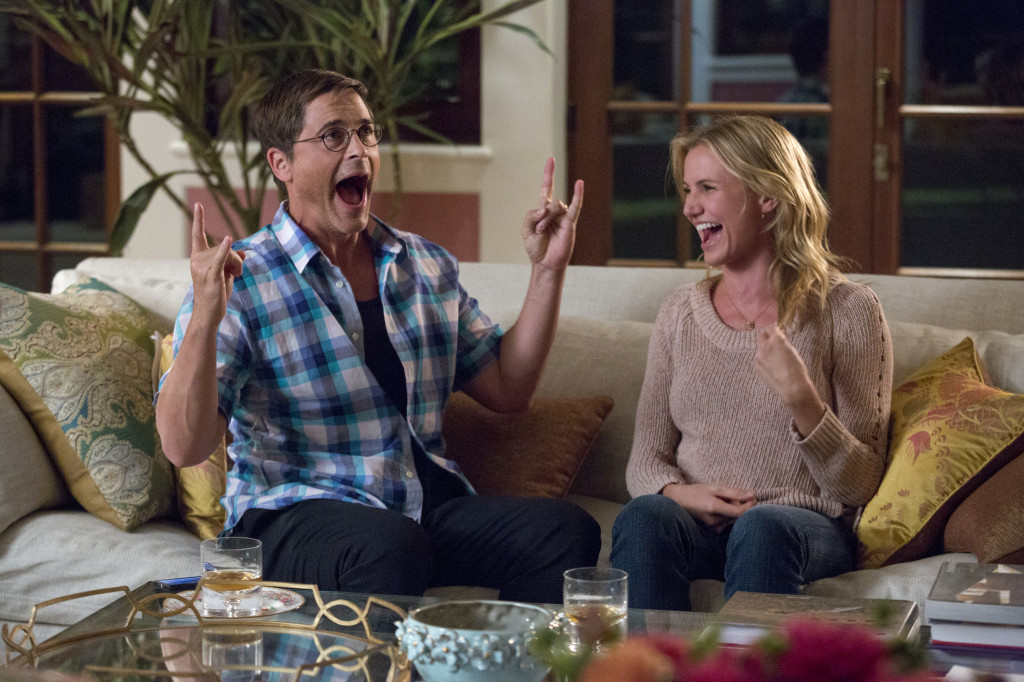 Cameron Diaz (Annie),and Rob Lowe (Hank) bond over how individual needs, wants and aspirations have been superseded by family responsibilities.