You are here:Home-Momagers in the News, Parents of Child Actors, THE BUZZ-In the News: Hollywood Mom PAULA HART, Momager of Former #ChildStar Melissa Joan Hart, Makes Deal with eOne Studio
Previous Next

According to Deadline.com, Paula Hart, momager and Hollywood Mom of Melissa Joan Hart, and her company Hartbreak Films will work with eOne Studio to develop and produce series and TV movies for family and animation programming. Under the deal, eOne will act as the worldwide distributor. 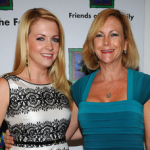