You are here:Home-CHILD ACTORS, Child Stars, Former Child Stars, THE BUZZ-Kevin Bacon Tells His Kids “Don’t Be Actors!”
Previous Next

Hollywood power duo Kevin Bacon (Crazy, Stupid Love; Mystic River) and Kyra Sedgwick (The Closer), married since 1988, actively discouraged their children (son Travis, now 21, and daughter Sosie, 19) from acting while growing up. Why?  To protect them from the “lifetime of scrutiny and rejection” which Bacon and Sedgwick have been subject to. 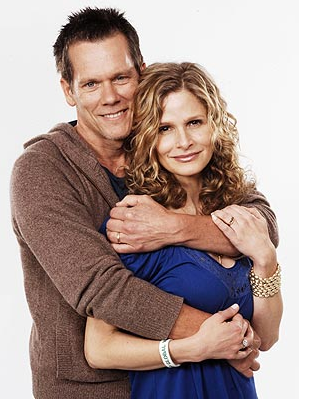 The former Footloose teen star Bacon is thrilled that his offspring have no desire to follow in his footsteps. Bacon recently told CNN television host Piers Morgan, “We were really so negative about (acting) when they were younger that neither one of them are interested and they’re pretty much on their way to doing what it is that they want to do at this point.

“It’s kind of weird that we were (discouraging), in retrospect,” said Bacon, “I mean, I think for both of us we were afraid of subjecting our children to a lifetime of scrutiny and rejection. We were talking before about how to be an actor, you’ve got to really have a really tough skin. If you paint a painting and you put it up there, people will judge your painting and they’ll say, ‘I don’t like that.’ “But when you’re an actor, it’s you (that’s being judged). It’s your face. It’s everything… It’s so personal that I don’t think we really wanted to put our kids through that.”