Kids Teens On-Camera Acting Workshops at Deborah Lemen Studios are a wonderful option for your child actor, not just this summer but all year-round. Screen Writer Sean Hood, who is an occasional guest director at the studio, interviewed Deborah earlier this month and it’s being reprinted here with his blessing and Deb’s as well.

Scenes created in some On-Camera Workshops are often stilted and awkward.  So much so, that Saturday Night Live parodied these “professional” services for kids.  Watch Spotlightz and laugh.

I recently interviewed Deborah Lemen and asked her about what makes her workshops unique.

How is your approach to teaching young actors different than other studios?

There are many on Camera Workshops in LA.

[which] don’t spend time with each individual actor, preparing and rehearsing them for his or her scene. They do not shoot on professional cameras. They do not shoot on location, but instead shoot against a blank wall.  They don’t provide professional directors to work with the students. Many workshops are also extremely expensive and provide results that look nothing like a real movie or television program.  As a result, these filmed scenes are usually a bad showcase for the actors.

After my on-camera workshops, actors receive two scenes that resemble clips from an independent film.

Why do your students look so natural on camera, as opposed to the awkward stagey-ness so often seen on young people’s reels?

With intense study and practice in the classroom, on set and on camera, I  place special emphasis on training the actor to respond quickly and fully to all stimuli, enabling each student to make fearless, confident and ultimately winning choices.  This leads to more natural, more engaging, and more stand-out performances. Younger actors are taught with the same emphasis on craft and authentic human behavior as are adults.    I take special care with each student. Every young actor has specific needs and individual strengths. Therefore, I don’t rely on any one method at the exclusion of others. I take all I have learned from a variety of renowned teachers and I find an approach that is best for each student – both teen and child actors who may be learning these approaches for the first time, and young adults who may already be comfortable with a particular method.

In New York, I studied with George Morrison and Jack Waltzer (Meisner, Strasberg, Stanoslavsky, Adler.)  In Los Angeles, I studied with Peter Flood (Strasberg, Meisner,) and I studied for 15 years in a Master Class with Ivana Chubbuck. I was founder of the Youth and Teen Division of the Ivana Chubbuck Studio, and I was the first to adapt the Chubbuck technique for kids and teens.

[quote style=”boxed”]I place special emphasis on training the actor to respond quickly and fully to all stimuli, enabling each student to make fearless, confident and ultimately winning choices. [/quote]

So often kids, teens and young adults are taught wrote memorization and this can lead to stiff, stilted and unnatural performances.  My students learn their lines rather than “memorize” them. My students know what they are saying, and they listen before they speak. If the words are not there, I teach them to breathe, and the words come.

I also teach script analysis. Each student – kid, teen, or adult – is taught to break down the script in Beats, Actions, Moments Before, Personalizations, Inner Objects, and Inner Monologues.  We discuss “Doings and Previous Circumstances.”  Most importantly, I teach that, after this rigorous script analysis, the actors must “Let It Go.”  Once the work has been done, really done, it is inside.  The actor knows what it is that he or she wants and what to do to get it, or what to do “to win.”    My teaching is about Human Behavior.  It’s not about the words, but rather what is underneath the words.

Why is it important to have experience working on camera as opposed to working in class?

There is a huge difference between learning how to be an actor in a classroom environment and actually putting it into practice.  My on-camera workshop is an opportunity to test an actor’s work in a professional environment, which can be distracting and overwhelming to actors experiencing it for the first time. We take what the actors know and what they have learned and we put it into action.

My Kids Teens On-Camera Workshops give the student the authentic experience of being on a movie set: Real Locations, Award Winning Directors, Professional DP, State of the Art Epic Red Camera, and a Professional editor.  Students receive two edited scenes.

I offer classes, for kids, teens, young adults and adults. The Kids Teens On-Camera Workshop is a wonderful compliment to the acting classes. Everything learned in class is applied to the on camera experience.  After taking On Camera Workshop, a student’s work grows exponentially in terms of craft but they also learn the practical skills that only comes from experience in front of a camera.

What is the advantage to having scenes shot professionally when building a reel?

If one wants to be a professional actor they need to show their work to the world. Getting cast in a film or on TV will do that, but in order to get those gigs or to even get your foot in the door, one must find a way to show them where your talents lie.  That’s what an actor can gain from the Kids Teens On-Camera Acting Workshops. They will ultimately leave with two professionally, directed, shot and edited scenes that promote their talents. It is perfect reel footage!    Furthermore, when professionals in the industry look at scenes shot professionally, they take the actor more seriously. They are able to see an actors look and talent without by bad picture or poor sound.  Because if the scene looks like a movie clip, a professional can imagine casting the actor in a movie. The work will grab their attention. And that is what is all about, to have people understand an actor’s talent, her beauty, and all the ineffable qualities that makes an her unique. 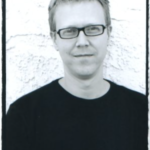 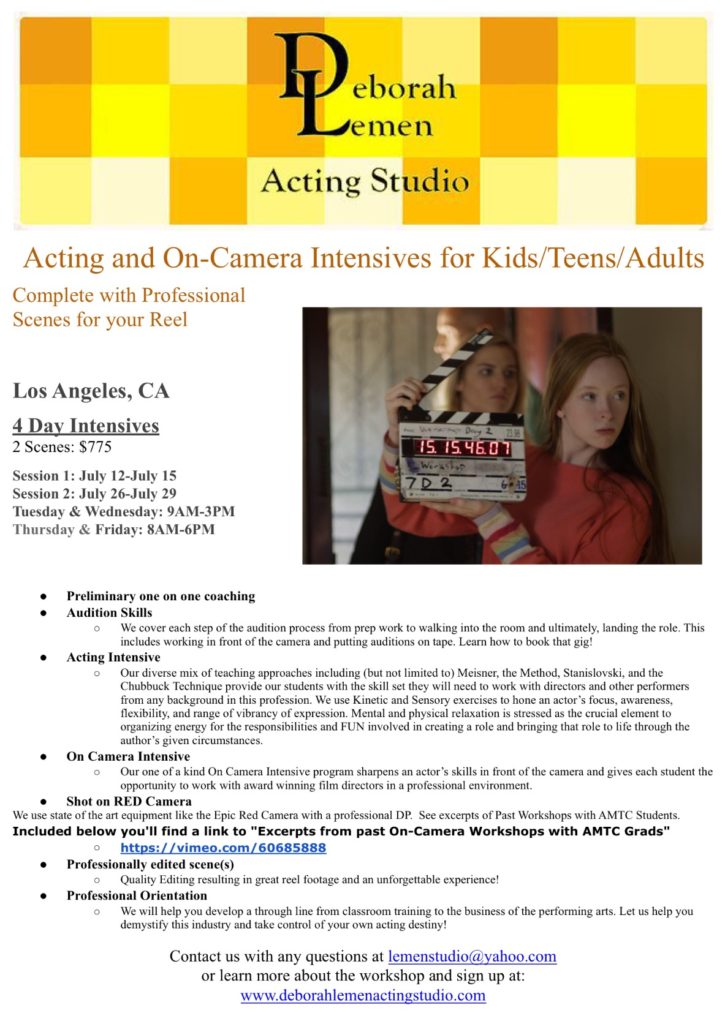 Deborah Lemen’s acting technique and workshops have proven to be career-changing as her students have been successful both theatrically and commercially. Lemen worked as the on-set coach for “The New Adventures of Old Christine” and one of Deb’s biggest success stories is Katie LeClerc, star of ABC Family’s Switched at Birth.

Deborah Lemen is a well known actor, and has appeared in more than 50 plays in New York and Los Angeles. She has also worked in film opposite Rob Schneider, Seth Rogan, Patrick Swayzee and others.  Her Film Credits include: DEUCE BIGELO, POINT BREAK, WHISTLESTOP GIRL, A SECRET THING, and Judd Apetow’s PINEAPPLE EXPRESS.

As a member of Filmmaker’s Alliance, a collective made up of 300 filmmakers, Deborah has written and directed over a dozen films.