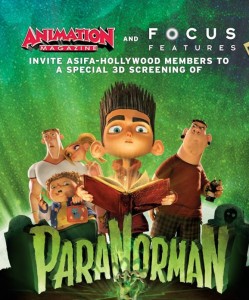 HMB attended an exclusive screening of ParaNorman in 3D on November 8, 2012 sponsored by Animation Magazine and Focus Features that was followed by an intimate Q&A with film’s writer, directors and producers – HMB Writer Valerie Sullivan attended.

My son Cody and I had not seen ParaNorman prior to this special screening and while it wasn’t what I expected, it was a very enjoyable film.  The main character Norman is a misunderstood boy who takes on ghosts and zombies while trying to free his town from a decades-old curse.  The story is comedic intertwined with sorrow, which is what writer/director Chris Butler was trying to achieve.

Following the screening, there was a Q&A with directors Sam Fell and Chris Butler(also the writer) and producers Arianne Sutner and Travis Knight.  The idea for this movie was sparked almost a decade before production actually began.  Butler realized there were no “stop-motion zombie movies” for kids.  Chris considered movies such as Goonies, Poltergeist and Scooby Doo when creating this new feature.  He wrote the first 30 pages of the ParaNorman script while working on the movie Coraline and presented it to producer Travis Knight.

The writers and producers wanted this family comedy laced with sadness to have a balanced intensity of, warmth, darkness and light.  They did an excellent job of achieving this effect, the curse is dealt with by meeting ghosts and zombies and figuring out what to do next.

Child Star Kodi Smit-McPhee (Hugo, Let Me In) was always the team’s first choice to voice Norman.  They knew he had the chops to play a believable 11-year old boy while also carrying the film as it’s lead. No adults were considered for the role.  The film makers felt all the character voices had to have a natural flow to them, had to be distinct from each other and must have the ability to convey fear and vulnerability.  The look of the characters was already determined by the time the search for the voice over actors began.

ParaNorman was completed at a rate of five frames per hour.  While stop-motion is tedious and difficult as it is completed frame by frame, the witch Aggie, was by far their most difficult character to create.  Aggie was a combination of stop-motion, CGI and 2D animation.  The stop-motion required building a set with fabric and lighting to achieve the effect they were attempting.

The challenges involved with this film were that they wanted to push it further than the animation for Coraline, to enhance the set design so as not to be claustrophobic and do their best to make the characters look like actual people—and that would appear as different shapes and sizes.  Essentially, each character is a small puppet and the set was designed to feel like a real place the characters would inhabit. The challenge with this was keeping seemingly irrelevant scenes in the movie – which made it into a more “real” world. 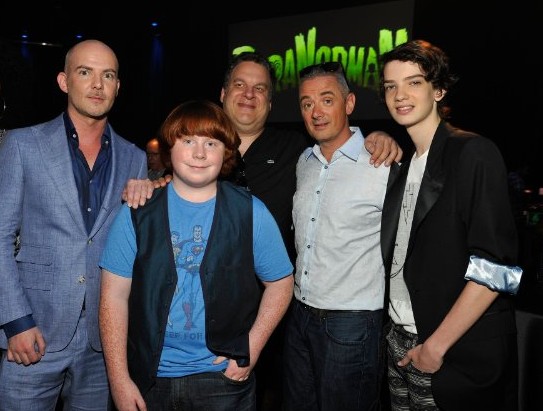 When asked what the film makers “surprises” were since the movie opened to audiences in August of this year, it was that the younger kids loved it and took the entire story-line in stride while the young adults admitted to being scared out of their wits!  ParaNorman is must-see, feel good movie we recommend for the entire family, with the possible exception of those easily frightened, young adults!

HMB Writer/Contributor Valerie Sullivan is Momager to Cody Sullivan, age 13. You can follow her life as a Hollywood Mom here on HMB’s“Momagers in the Trenches” column and on her personal blog.

About the Author: Valerie Sullivan