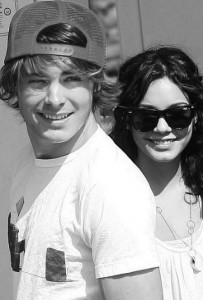 Zac Efron, 22, soon to be seen in Charlie St. Cloud, apparently learns from the mistakes of his celebrity peers. Efron may have also learned a few things about the perils of  “over-exposure” from girlfriend and High School Musical co-star Vanessa Hudgens (pictured left), who received a wave of bad press for nude photos she took of herself which subsequently leaked to the internet.

Unlike his love interest, Zac takes precautions to be known solely for his acting career. He regularly studies how other young stars are perceived in the media and changes his own behavior as a result.  Efron states, “Every time something does happen [in the media] – and I notice when those things happen – people go through those things and experience that kind of stuff.  I take note of it, a mental note, ‘Wow, that didn’t work’, so from that point on I sort of look out for that. I kind of adapt.”

The former teen star admits his own film idol is himself a former teen heart throb – film star and activist, Leonardo DiCaprio (Inception, 2010).  “He’s super-talented, grounded and focused and that’s everything I want to be in the future,” states Efron, “He’s experienced the good times, the bad times, the scary times and the amazing times and [he’s] still escalating. It gives me some hope. It inspires me to keep going.” 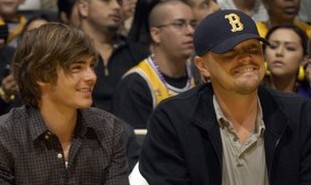 Zac Efron, who is regularly seated next to Di Caprio at the Lakers games says that the Titanic star isn’t spilling any great industry secrets and that their conversations are “nothing out of the ordinary.”

Efron tells MTV News that Di Caprio is a “normal guy”  and that while they don’t regularly discuss business, there are times when DiCaprio helps Efron out with his career. “He’s a cool guy and he is helpful,” Efron said. “I ask him questions every once in a while, and he gives advice to the best of his abilities, but he’s not like a life coach.”

In the May issue of GQ, Efron shared that DiCaprio told him to avoid heroin at all costs. “I thought I was gonna ask him questions,” Efron said. “He ended up asking me questions, and in that, he told me a lot. He said, ‘There’s one way that you can really f— this all up. Just do heroin. If you steer clear of that — the other obstacles you’ll be able to navigate.'”

Efron also defends that he was never “programmed by Disney” to behave properly in public.  “It’s common sense” he says,”If you’re gonna be drunk with your friends, don’t get wasted at the Chateau Marmont and hook up with some famous chick.  It’s not rocket science. I don’t want to be famous [as a] personality.”

In regards to his private life Efron wisely states, ” I keep that under wraps.”