You are here:Home-Best Acting Classes & Coaches, CLASSES, THE BUZZ-New York Film Academy: Much More Than An Acting School @NYFA
Previous Next

New York Film Academy: Acting School
It’s one of the finest acting schools on the planet, and it’s even more than an acting school.

The New York Film Academy has always been recognized for its second-to-none acting school, partly due to its commitment to offering expert tuition – just ask Steven Spielberg, Sir Ben Kingsley or Ben Stiller, all of whom have offered their personal insight at the Academy.

Alongside the expansive list of renowned guest speakers (of which there are to many to list here) are the regular on-campus tutors, all of which are stellar in their own right. NYFA staff are fully equipped to offer personable and tailored tuition to the actors under their wing, drawing on expert working knowledge in film, TV and theater acting.

Students can expect tuition from seasoned professionals as standard, but the New York Film Academy Acting School goes above and beyond. What distinguishes the Film School from the competition is how it prepares its actors for world outside of the classroom; All practical work carried out during the course of study contributes to the actor’s professional show reel – what’s more, the curriculum is designed to give students a working and practical knowledge of all aspects of the filmmaking process, not just acting.

Keeping an Eye on the Bigger Picture

The classroom is great. In front of a camera is better.

All students embarking on an education with the New York Film Academy’s Film School can expect to be proud of their resulting DVD film reel; the physical result of intense study, and application, of the wide-ranging disciplines taught throughout the programs.

Students at the Film School will explore many concepts through course work, but they’re also required to get their hands dirty right from the first week. This involves becoming intimately familiar with the fundamentals (and nuances) of acting, with plenty of time studying behind-the-camera duties too. The Film School invests in cutting-edge equipment and its professional workspaces on a yearly basis, so students can be confident they’re working with the finest industry-grade equipment whether they’re setting up for a shoot or behind the editing desk.

This comprehensive approach gives students a greater understanding of the filmmaking process as a whole, and the complimentary skills learned throughout the course are of proven benefit to a learning (or even established) actor.

Needless to say, the contacts and friends made while working on collaborative projects are worth their weight in gold, too.

But the Film School tutors know that it’s not all social fun and appreciate that students don’t enroll purely for the sake of learning; programs offered at the New York Film Academy are built around making sure students are prepared for real work in the industry, and how they can put their knowledge to good use. That’s why a large proportion of graduates go on to lucrative careers within their chosen discipline after gaining a degree at the NYFA.

The New York Film Academy offers training to prospective students who are interested in gaining practical filmmaking knowledge that is recognized on an international level.

With a proud history stretching back over two decades, NYFA’s acting school has grown from its home city to incorporate locations not only throughout the US but across the world. Within its aim to offer so much more than a standard acting school, the Academy’s international reach also serves as a global support network for its students and graduates – in fact, across its two US campuses, the student body is comprised of over seventy different nationalities.

Each of the foreign study programs incorporate the film heritage and opportunities offered by their host countries. Otherwise, there is no difference in the unparalleled level of quality students can expect from the programs.

As such, an actor with an NYFA background will find themselves in good company whether they’re in the Big Apple or the Far East.

Flexible Learning to Work Around a Budding Career

In addition to operating in multiple locations, The New York Film Academy provides a range of courses to work around individual needs.

Depending on an actor’s previous experience (of which none is required for some degrees) and the required intensity of study, three accredited degrees are offered in addition to the international-based programs listed above.

AFA – The Associate of Fine Arts degree is a great option for prospective students who have a High School Diploma (or GED) and want to continue their education with a focus on acting. Based at the LA campus, the first academic year introduces the student to the fundamentals of film acting (including  practical work which will form part of their show reel) while the second year will further build on the strengths uncovered during the first half of the program.

BFA – The Bachelor of Fine Arts in Acting for Film is one of the most popular, and engaging, courses offered by the Academy and is a powerful inroad into the film industry. Over a period of three years, the intensive training offered by expert tutors in a professional setting will give students a real-world knowledge of acting and other essential areas of filmmaking.

MFA – The Masters of Fine Art in Acting is a two-year, full time degree program based at the Universal Studios campus in LA (with the possibility of continuation from prior completion of coursework at NYC). Designed for actors looking to further build on their Bachelor’s qualification, this accelerated program is an in-depth and practical exploration into advanced filmmaking.

A Warm Welcome to All

Even those who have no experience in acting (but make up for it in determination!) will find a program to suit alongside the more intensive degree programs mentioned above. With a wide range of flexible options, and for more information on applications and funding, visit: http://www.nyfa.edu/acting-school/ 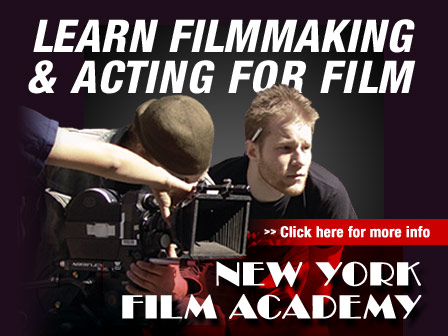