You are here:Home-CHILD STAR STYLE, On the Red Carpet, THE BUZZ-Teen Stars Chloe Moretz and Ariana Grande are the Red Carpet Darlings of the 2013 Billboard Music Awards
Previous Next

Chloe Moretz, 16, was looking feminine and funky at the Billboard Music Awards held at the MGM Grand Garden Arena in Las Vegas on May 19th. Lately, the “Carrie” star’s red carpet choices have not been on my must list (specifically the pink gingham dress at the Nylon Young Hollywood Party), and I know she is getting mixed reviews on this Fendi dress, but I actually really like it. It’s a soft blend of textures and color blocking and not too busy for the eyes. She also shortened it from the original runway version—a good choice in my opinion!

Moretz’s Fendi shoes also continued the black and white theme. While I like the shoes, I’m mixed on whether I LOVE them with her dress (perhaps a neutral stiletto platform would have been better). 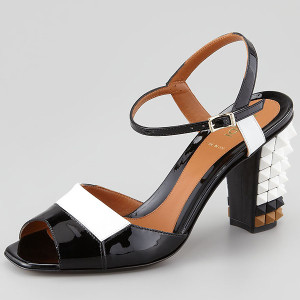 Moretz’s Fendi shoes also continued her black and white theme for the evening.

Another great look from the night was spotted on “Victorious” star Ariana Grande, whose current single “The Way” is sure to be a fun summer hit. The 19-year old Nickelodeon star continued her noticeable trend for wearing short and flirty dresses by wearing a black Jovani dress with a sheer lace panel. Jovani is very popular for special occasion dresses, and the prom experts predict that Junior prom is now all about the short dress. So take note for next year girls!

What did you think of Chloe and Ariana’s looks? Who was your favorite? 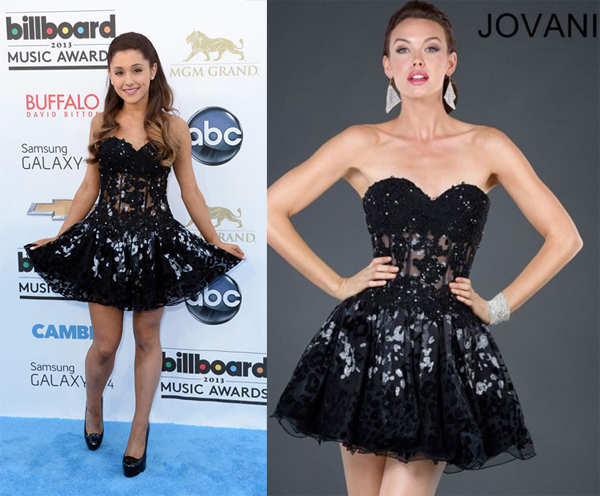 Ariana Grande wore Jovani to the awards show, a line that is very popular for special occasions and with prom goers.