You are here:Home-CHILD ACTORS, Child Stars, In the News, New talent, THE BUZZ-Will Smith on Son Jaden’s Acting Career
Previous Next 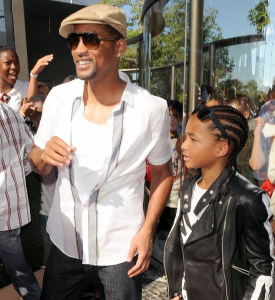 Will Smith made his humble Hollywood debut on television’s comdey “The Fresh Prince of Bel-Air” and quickly graduated to a string of huge Hollywood movies: “I am Legend” The Pursuit of Happyness,” “Hitch,” “Bad Boys,” “Seven Pounds,” “Men In Black,” “Ali” and “Hancock.” If anyone knows the pitfalls and the glory of this business it would be Smith.   He’s managed to keep his marriage to actress Jada Pinkett Smith in tact, healthy and out of the tabloids and now he’s venturing into new territory, Hollywood Dad to son Jaden, and daughter, Willow, who are now involved in the entertainment industry as well.  Not only is he a mentor to his children, he has taken on the role of producer on 12-year-old Jaden’s starring project “The Karate Kid,” a remake of the 1980s flick.  Here is an excerpt of an interview he did recently with enigma discussing his new role.

Q: How big do you think Jaden has got the potential of being? What’s the best parental career advice you’ve given him?

A: Well The Karate Kid made $56 million in its first three days in the US, which is bigger than any of my movies other than Hancock and I Am Legend. So for me I’m wondering if he still needs to live in our house! If one more person calls me the Karate Kid’s dad, I was like…alright, Men In Black III is coming out immediately!

I think the thing I really say to him and I do very often is…it’s about people. This business and what we do, a lot of people get lost and a lot of other things. But at the end of the day it’s really about people. Even in this format, you are here to feed your family. We are here to feed our families. So in this exchange I am going to give you everything I can possibly give you so you can feed your family and hopefully in exchange I can feed mine. And if we can keep it that simple then no one will get lost in a deadline… It’s about people. Your goal is about assisting that person more than it is about getting what you want. So to me, I’ve been able to navigate in this business very effectively based on that simple idea.

Q: Are you worried about Jaden falling like other child stars have done?

A: He didn’t have the shock and the radical life change that child actors usually have coming into the business. This is not his first red carpet, although it is a little bit of a shift because the attention is on him. But for the most part it’s not a shock to his life. And I think what happens to child stars is that they become the bread winner. So child stars are generally broken by the pressure of being the bread winner of a household at 14, or 16. I know at 41 that the bread winner of a household has its pressure. When you put that on to the child you almost lose your parent child relationship. A bit of your power gets destroyed in that situation. So you either have to be a dictator because you’ve got to keep the lights on or you’ve got to surrender. I hope we have a bit of a handle on it. We’re focusing very closely and paying attention to his energy and his desire and his love for it.

Q: Did you have any problems on the set of the film?

A: We got towards the end of the project and it got extended an extra month. So we were telling an 11-year-old who thought he was about to go home that he’s got an extra month in China. I left that one to mommy, ‘You go in there and tell him baby.’ But he was so focused that he started to train during lunch. So he would work the morning and then train for two hours at lunch and then go back to the set. That was how serious and focused he was about getting it done. He just had that level of commitment.

Q: Were you ever worried about Jaden hurting himself doing the technical moves in the Karate Kid?

A: That was one of the things with Jaden it was a fantastic thing to watch. Specifically the splits. There was a day he was there practicing and he had a tear running down his face. That was difficult as a father. Although as a producer it’s good!

Q: Do you think your children will want to continue working in films?

A: Oh yeah. Jaden is like Johnny Depp. He wants to do brilliant work and he absolutely loves acting. However, my daughter Willow – she’s more like Paris Hilton! She just wants to be on the TV.