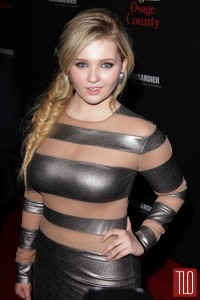 The Los Angeles premiere of critically acclaimed film AUGUST: OSAGE COUNTY  was held December 16, and HMB was invited to attend both the screening and after-party at Regal L.A. Live and the Ritz Carlton’s WP24 respectively.  After battling hefty holiday traffic and a slew of red carpet rubber-neckers to enter the venue, fellow Hollywood Mom Suzette Troche Stapp and I were whisked into the enormous theater, where the lights dimmed and we were transported via movie magic to a sweltering summer in Oklahoma. 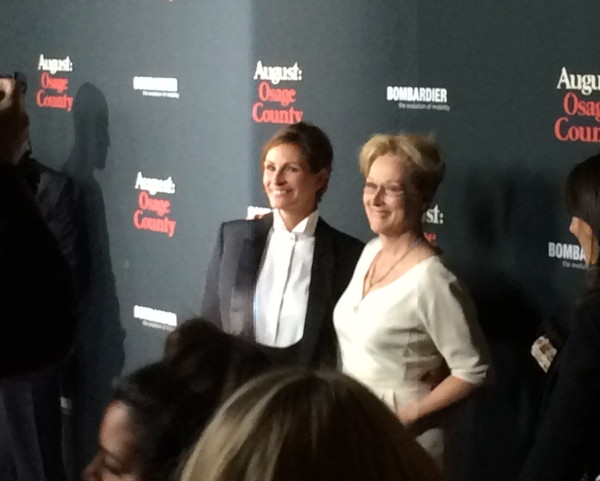 Roberts and Streep on the Red Carpet of the AUGUST: OSAGE COUNTY L.A. Premiere 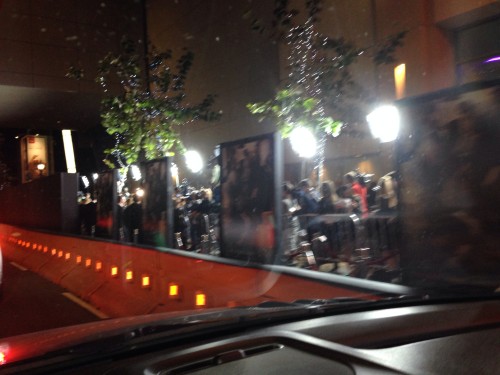 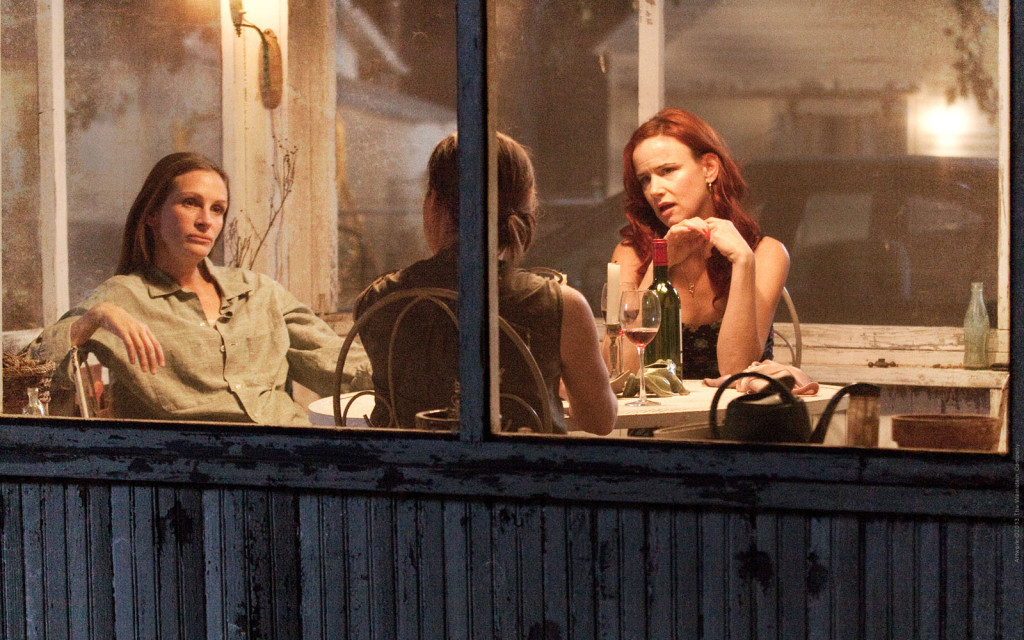 Meryl Streep expertly inhabits the pill-popping Weston family matriarch, an ailing addict with a razor-sharp tongue, oblivious to anyone’s feelings yet wielding omniscient powers when it comes to the Weston family’s darkest secrets.  Julia Roberts turns in a solid performance as the eldest Weston daughter, hardened by life’s circumstances and struggling to avoid her mother’s fate. I could go on and on about all the talent in August: Osage County but the critics have done it for me. The film won the Hollywood Film Festival’s Ensemble Cast and is nominated for a SAG Award for “Outstanding Performance by a Cast in a Motion Picture.”  More award nominations and wins are certain to come. 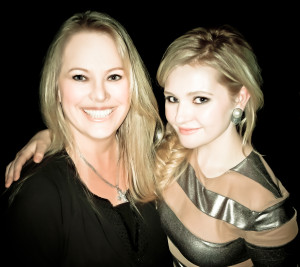 The only child actor in the Oscar-calliber cast, Abigail Breslin, 17, is spot-on as Robert’s self-absorbed, 14-year-old daughter turning in a truthful portrait of what could easily have been a teenage caricature for a less-adept actress.

Abigail Breslin first appeared onscreen as Mel Gibson’s daughter in M. Night Shyamalan’s SIGNS (2002) and then in her iconic role as Olive in the critically-acclaimed LITTLE MISS SUNSHINE (2006), about an ambitious girl obsessed with entering a beauty pageant. For the latter performance, Abigail was nominated for an Academy Award, SAG and BAFTA Best Supporting Actress honors. In Addition, Abigail was honored as ShoWest’s “Female Star of Tomorrow” in 2008.  I personally loved her in the feel good film DEFINITELY MAYBE with Ryan Reynolds and never pass up a chance to catch the television reruns.

Abigail has had quite a busy 2013 first in the Lionsgate film ENDER’S GAME (opposite Asa Butterfield, Harrison Ford, Ben Kingsley and Hailee Steinfeld), last month as the lead in the IFC film HAUNTER about the spirit of a deceased teenager determined to keep others from suffering her fate, and now in AUGUST: OSAGE COUNTY.

Also in 2013, Abigail wrapped production on FINAL GIRL directed by Tyler Shields; WICKED BLOOD directed by Mark Young and PERFECT SISTERS directed by Stanley M. Brooks.   Abigail next stars in the film MAGGIE, opposite Arnold Schwarzenegger, about a Midwestern teenage girl who becomes infected by a zombie.

Abigail is represented theatrically by Meredith Fine at Coast to Coast. 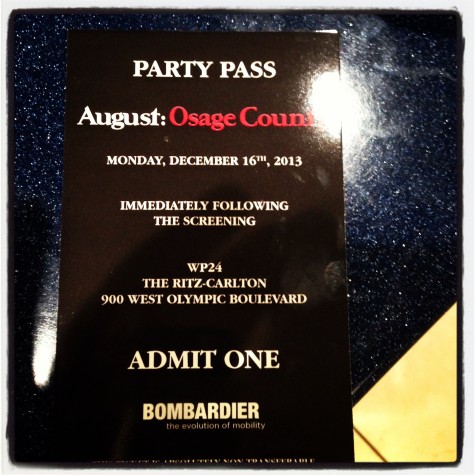 And here’s the scoop on the after party. WOW.  As one would expect, the Ritz was expertly decorated for the holidays. The portico entrance was domed by a bare-brenched tree dripping with magnificent chandelier crystals and twinkling lights.  The after-party was held on the 24th floor, in Wolfgang Puck’s beautiful restaurant and lounge, WP24, which boasts almost unobstructed 360 degree views of the city.  The restaurant was made even more glamorous  by that fact we spent the evening within arms reach of industry power houses Meryl Streep, Julia Roberts, Dermot Mulrooney, and Harvey Weinstein among others.

When we met Abigail she had casually abandoned her pointy, nude heels and was relaxing with musician boyfriend Jack Barakat, 25.  Just as lovely  in person as she is onscreen, Abigail graciously spent a few minutes chatting with us about her role in the film and HMB.  Before snapping her picture, the petite 5′ 1″ actress quickly slipped her heels back on and gave HMB a smile worthy of winning “Little Miss Sunshine.”   There’s no doubt we’ll be watching this talented young actress for many years to come.

The Weinstein Co. has teamed up with MyHeritage.com (a wonderful site that helps trace your own family tree) for the release of August: Osage County to help you learn more about the Weston family and your own family with a free premium membership! You can also check out the interactive Facebook app here http://bit.ly/Ip1WOb  for a chance to enter the sweepstakes to win weekly prizes and a grand prize. Good luck! 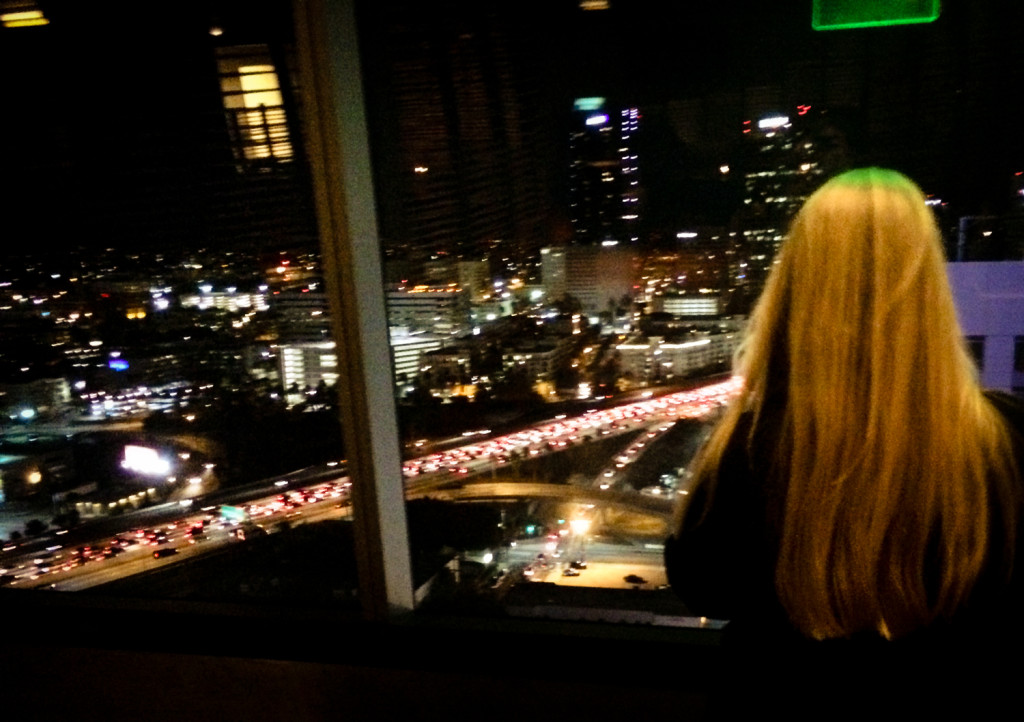 Taking in the holiday gridlock below from our swanky perch in WP24. Photo by @GlitterGuru Suzette Troche Stapp