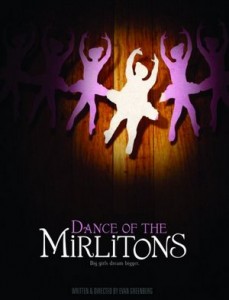 The casting directors in both Los Angeles and New York are conducting a talent search for a 10 – 12 year old Caucasian girl to star in the film playing Kristen Bell’s daughter. Bell plays single mother Corinne who has moved her working-class family to the idyllic town of Battleboro so that her 13 year old daughter Jesse can attend the world-famous Battleboro School For Young Dancers. But when chubby Jesse discovers she’s been placed in the special ed program she embarks on a take-no-prisoners mission to land the lead in the school production of Sleeping Beauty.  Shooting on ‘Dance of the Mirlitons’ begins in November, 2010.

[JESSE URCHIN] FEMALE, Caucasian 10 to 12 years old, SHOULD BE AT LEAST A LITTLE OVERWEIGHT OR AWKWARD IN SOME WAY AND HAVE SOME KNOWLEDGE OF BALLET.