You are here:Home-THE BUZZ-Casting Director Howard Meltzer Shares a Wealth of Knowledge with Child Actors in NOHO Today
Previous Next 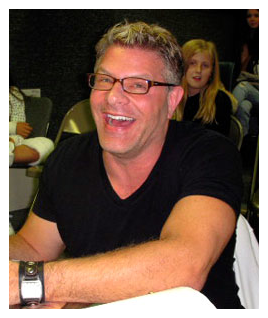 While I write this, I’ve left my 11-year-old daughter Jordan in the very capable hands of casting director extraordinaire, Howard Meltzer.

Jordan and approximately 25 other young, Hollywood hopefuls are fortunate enough to be working with Howard one-on-one for the next 2 hours.  As both her mom and as writer for HMB, I approached this workshop differently than others we’ve attended in that to my knowledge Howard has no idea I (Hollywood Mom) was sitting in on the parents Q & A audience this morning, no idea that my only child is no doubt hanging on his every word and no idea that I would be blogging about the workshop experience on HMB.

This all came about a few weeks ago when a good friend of mine, Cynthia Black, a talented costumer I was blessed to work with and befriend on “Pleasantiville,” asked me if  I was familiar with Actors West and their multitude of workshop offerings. I’d come across advertisements for workshops in their Westlake Village and NOHO locations but the players seemed so knowledgeable and so connected I had suspiciously wondered the same thing she was now asking: “Is this legit?”

The answer is a resounding YES!  In Los Angeles we are fortunate to have so many amazing resources and sometimes it’s a stretch to believe that many of them are legitimate. But as Howard reiterated this morning, Los Angeles is a city filled with talent.

I gleaned the following in our Parents Q & A:

Howard’s first and resolute choice was (as I have long suspected), Coast to Coast. He stated that C&C is in sync with what he is looking for in an actor and that 9 out of 10 of the actors C&C sends are on the money in terms of casting.  And that the tenth actor you ask?  Although possibly not right for that particular casting, the tenth actor is almost always someone he needed to meet and would likely cast in the future.  Overall Coast to Coast “trims the fat,” and only sends the appropriate talent which is refreshing for him as casting director and a huge benefit to the talent involved.

Have to run and pick up the kidlet now – I’ll post the rest of the review soon!

Howard Meltzer is the “go to” Casting Director in Los Angeles for the two hottest kids networks, Disney Channel and Nickelodeon. Networks and film studios alike seek Howard’s expertise and keen eye to uncover new, young talent for webisodes, theater, TV pilots, TV shows, and feature films. Howard has a distinguished and proven track record, which is why he is one of the busiest Casting Directors in Hollywood.

Meltzer is currently casting the new smash hit series for Disney Channel, “Shake it Up!” starring Bella Thorne. Other recent projects include “Billion Dollar Freshmen” for Disney XD, and “Life With Boys” for YTV, but Howard is probably best known for casting four seasons (100 episodes!) of the hit Disney Channel series “Hannah Montana” and the pilot and season 1 of the new Disney XD series “I’m in the Band”. Other TV series on the air that Howard’s office cast include: Big Time Rush (Nickelodeon), The Troop (Nickelodeon) and The Fresh Beat Band (Nick Jr.). Recent film projects include Den Brother (Disney Channel), The Best Player (Nickelodeon), and was a consultant for the feature film Diary of a Wimpy Kid (20th Century Fox). Howard is originally from NYC where he cast theater. Broadway: The Graduate, Fortune’s Fool, Gore Vidal’s The Best Man, Elaine May’s Taller Than A Dwarf, Honour, Epic Proportions, Annie Get Your Gun (Revival), Fosse, Chicago (Revival), Annie (Revival), Grease (Revival)