CHILD STAR STYLE: Denyse Tontz is Both Sassy and Sweet at Daytime Emmy’s!

CHILD STAR STYLE: Denyse Tontz is Both Sassy and Sweet at Daytime Emmy’s!

All My Children and Dog With a Blog actress Denyse Tontz, 18, graced the red carpet looking like a young Katie Holmes at the 40th Annual Daytime Emmy Awards at the Beverly Hilton, June 16th.  Her flowing,Ted Baker halter maxi dress was reminiscent of Holmes’ Calvin Klein Met Gala gown, and some of her other simple, monochromatic red carpet choices. Adding a touch of boho chic, Tontz wore a messy, side-swept braid and natural makeup. It’s no surprise that she landed on some best-dressed lists from that night.

A few days earlier, Tontz appeared at a cocktail reception for the Daytime Emmys in a short, red dress with sweetheart neckline by Billion Dollar Baby.  Again she kept her hair simple, though it looked like she could have brushed/trimmed the ends a little! Later that night she tweeted: “HUGE thanks to @StopStaring for dressing me tonight for the daytime pre-EMMY party!! Really loved this cute little number.”  Her dress, and other alluring red options, can be found on the Stop Staring website starting at $142. 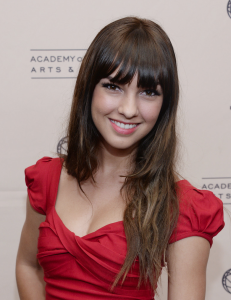 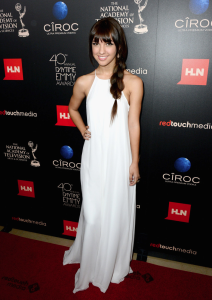 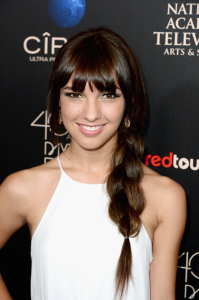