Jackie Evancho might not be a name you recognize immediately from IMDB, but you may recall how she captured the attention, and hearts, of the world with her stunning performance on America’s Got Talent.  Since then the young Classical Crossover songbird has gone on to release 5 albums, including a platinum and gold album, and has had three Billboard 200 top 10 debuts. 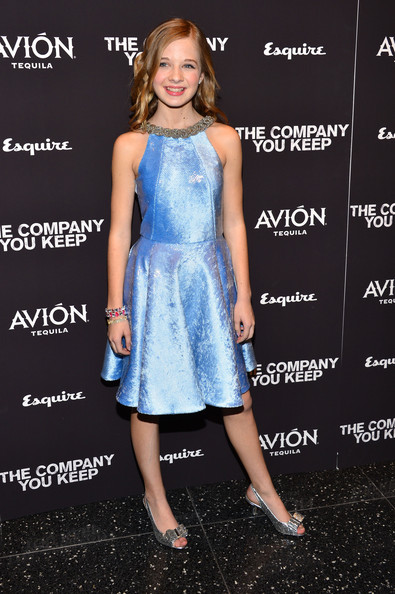 Jackie Evancho at the NYC Premiere of her first feature film, “The Company You Keep.”

Now Evancho’s turning her talent to the big screen in the upcoming Robert Redford directed thriller, “The Company You Keep,” with former child star Shia LaBeouf and Redford himself in addition to a star-studded cast.  At the April 1, NYC premiere of the film, the 12-year old singer-turned-actress, who plays Redford’s daughter Isabel in the film, was spotted in an ice blue, crushed velvet dress by Turo Parc with silver sling-back kitten heels. Her sophisticated look is perfectly New York.

She wore a dress with similar neckline at the Toronto Film Festival premiere of the film back in September 2012. Blue is definitely her color!

In between red carpet events, Jackie is on her North American tour with appearances planned for April, May and June all over the country.  To buy tickets or learn more about Jackie’s impressive music career, visit her website http://www.jackieevancho.com.

Evancho is represented by William Morris Endeavor and Managed by Marc Johnston at Align Entertainment Group.