You are here:Home-RESOURCES (For Your Actor), THE BUZZ, The Counselors Corner-COUNSELOR’S CORNER: Confronting Chaos; Lindsay Lohan’s Next Step @westcoastcenter @lindsaylohan @oprah
Previous Next

*As we were about to publish this edition of Counselors Corner on Lindsay Lohan last week, several incidents occured which couldn’t go without acknowledgement. On Sept. 12, 2013, Lohan’s mother Dina, 50, was arrested for speeding and DWI.  In court today, Sept. 25, 2013, with her own mother Ann Sullivan by her side, Dina pled not guilty to these charges. Judge Joy Watson released Dina Lohan without bail but ordered her driver’s license suspended, citing the severity of the alleged drunken driving charge.  Then according to TMZ, JP Morgan Chase Bank decided to file a foreclosure action against Dina Lohan who has struggled to pay her bills over the past few years. Lastly, in the midst of this chaos, Bird Street Books announced that Dina will be releasing her tell-all memoir, “A story of shattered dreams, incredible disappointments and comebacks, and a mother’s admission to an imperfect life,” in December.  – HMB Editor Tracy Bobbitt

We watched Oprah Winfrey’s recent interview with former child star Lindsay Lohan with a sigh of relief and a tinge of hope for the young star’s future. Lohan seems to be at that stage in addiction recovery where she appears to be ready to face her demons head on with the vulnerability and humility it takes to go forward.

We’ve talked a lot about the way young stars break down in public on the verge of maturity and Lindsay is a classic example. She admitted in the interview that all of her problems started after filming Mean Girls when she was catapulted into a higher level of fame and suddenly had more money than she knew what to do with it. Coupled with suddenly being eighteen years old and moving to the celebrity-filled, party city of Los Angeles, she fell into a fast-paced cycle of destruction. She wasn’t afforded the guidance it takes to settle into her transition from childhood to adulthood. Her many groupies and her professional team that now surrounded her were eager to keep her happy in the fantasy bubble of booze and drugs they all shared. 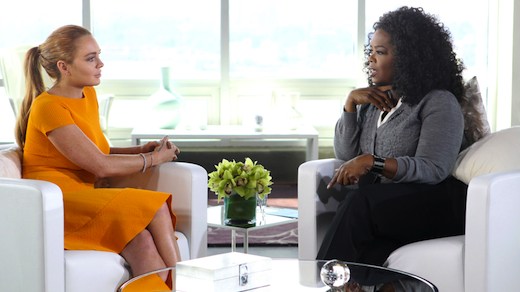 When Winfrey asked Lindsay if she thought she was addicted to chaos, Lindsay admitted that yes, her young family life at home had always been filled with it. This is important to note because underneath every addict’s drug of choice is an underlying problem they are attempting to submerge. Lindsay may have been constantly grabbing for the cocktail glass to escape her present moment yet unconsciously it may have been an attempt to keep the “chaos” she knew and was comfortable with, at bay. At home, chaos was a natural state. It is not a surprise that being surrounded by people who didn’t have her best interest at heart and living on another coast away from supervision or parental control, would eventually be a reenactment of her destructible family dynamic.

Without yet realizing that her early family life had contributed to her addiction to chaos, Lindsay was prone to, and subsequently did, fall. We watched her tabloid-driven parade through drinking-related criminal acts and many failed attempts in rehab that eventually landed the former child star in jail. When she admitted on Oprah, that she had felt strangely relieved for the chance to get some peace outside of her life behind bars, we knew exactly what she meant. Running on empty catches up with us all.

In her open conversation with Winfrey, Lindsay began to speak frankly about her difficulty with developing her self-awareness and facing her problems honestly over the years. This was a huge step and one that denoted a true desire towards psychological healing. It takes a lot of courage to admit you’ve made mistakes, to claim them as your own and to try to set the record straight after years of lies, denial and self-betrayals. It’s a scary threshold to cross but one that comes with instant relief once traversed.

We are told that after the interview, Lindsay cancelled a European trip at the prodding of Oprah who had warned her it was simply too easy to want a Bellini in the morning overseas. The fact that Lindsay did indeed pull out of her plans signified a sincere attempt at putting her recovery first, which in turn denotes a woman who is taking responsibility of herself. Of course, there is still a long road ahead for Lindsay; one in which consistent contrary action and follow through is essential for her success with sobriety. But needless to say, we are rooting for her!

In bad taste, an easy prediction or possibly a bit of both? Tracy Ullman impersonates Dina Lohan.