You are here:Home-CHILD ACTORS, Exclusive Interviews, Former Child Stars, THE BUZZ, Then & Now-DAYS OF OUR LIVES Soap Hunk BRYAN DATTILO Began Career as a Child Actor!
Previous Next 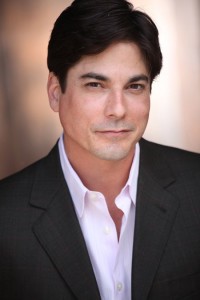 Hollywood Mom Blog was invited to take an exclusive, behind-the-scenes look at daytime television’s guiltiest pleasure,”Days of our Lives,” (DOOL). Having grown up watching the show, we were excited to hit the NBC lot and get an insiders look at how DOOL runs.

Maya Frangie led the set tour, along with Sony Pictures Director of Media and Talent Relations Gabriella Alaimo Thomas. Hollywood Mom Blog was given carte blanche to take pictures, roam about the sets and create a little ruckus with a life-long-fan in tow, HMB editor Tracy Bobbitt’s mother-in-law Lori whom we affectionately refer to as “Grandma Lori.” Grandma Lori has been a faithful follower of DOOL every day for the past 40 plus years and was so excited, she had to hold onto her heart so it wouldn’t leap out of her chest!

HMB first spoke with heartthrob Bryan Dattilo and Grandma Lori immediately discussed his character’s much-needed return to the show. “Sami needs you now!” she implored. DOOL fans are having their wishes come true as Bryan Dattilo has officially rejoined the cast. Needless to say, both Grandma Lori and Bryan are happy Lucas is back in Salem.

Unbeknownst to many, Bryan began his own career as a child actor, winning his first role on the satirical television series ; Not Necessarily the News. Bryan balanced his early acting ventures with stardom on the baseball fields of Beverly Hills High School. His acting career soon took off as he made appearances on TV shows Doogie Howser,Charles in Charge, In the Heat of the Night, and Crazy Like a
Fox.

In 1993, Bryan joined the cast of Days of Our Lives as heart throb Lucas Horton. Young girls everywhere were instant fans of Alison Sweeney’s on-camera love interest. In 2005, Sweeney and Dattilo walked away the coveted Soap Opera Digest Award for Favorite New Couple. Chatting with Bryan feels like hanging out with an old friend from high school. His down to earth personality is as charming as his smile. Bryan’s humility is refreshing and genuine.

Bringing up his start on the show as Ali Sweeney’s love interest reminds him of a story that he shares. “Ali asked me to her prom when she was 16.” Bryan, then 21, declined her invitation fearing the age difference was too great. When his mother got wind of his response, she steered her son back on course. “You call her right now and tell her you would be HONORED to escort her to her prom!” Bryan followed mom’s advice.

I asked Bryan how he feels things have changed over the years for child actors and kids who are trying to break into the business. “What’s similar is that you still have to separate from your friends. Make your own mark. And there is still the ‘Lindsay Lohan fear’ of not being able to transition [into a mature acting career].” He rocked back in his chair adding, “What’s different is that back then, as child actors, we had one foot in reality. Now kids have both feet out.”

Bryan’s own son Gabriel, age 12, is in 6th grade. While Gabriel is not pursuing an acting career himself, he religiously helps his dad run lines for the show. “He’s a stickler for accuracy,” Bryan grins proudly. “He asks me if I need help every night.”

Nicole Hanratty, is a contributing writer and event photographer for HMB. Nicole Hanratty lives in Southern California. She is a mom, daughter, sister, aunt, friend as well as housekeeper, taxi-driver, athletic model, personal chef and family social planner. Read her musings on all things music at Life of a Rock Star.