You are here:Home-CHILD ACTORS, Child Stars, Former Child Stars, In the News, THE BUZZ, Then & Now-Former “Who’s The Boss” Child Star Outed As Tupperware Salesman by Perez Hilton
Previous Next 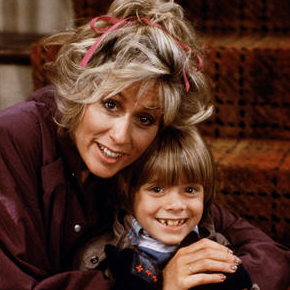 With Judith Light, "Who's the Boss?"

It’s been revealed that former child star Danny Pintauro, 34, who played Jonathan Bower on the 1980s sitcom “Who’s the Boss,” is now a Tupperware salesman.  I can’t believe that a former child star being gainfully employed outside the film industry is breaking news, but there you have it.

Perez Hilton has pealed the plastic lid off the proverbial casserole dish and announced that Pintauro, a Stanford Graduate who came out as being gay in 1997, has just launched his own business page on the official Tupperware site soliciting customers to host a “Tupperware party” with him in their home.

His Tupperware bio states: “My name is Daniel and I am a brand new Tupperware Consultant.  I’m here to party with you and show you that Tupperware is sexy, hip and not just in your grandmother’s kitchen! Look out America! Here we come!  If you live in Southern California, I’d love to come to your house and have a party…If you DON’T live in Southern California, I’d love to throw you a party too….but that’s a bit trickier. Care to fly me there?”

Pintauro’s bio additionally reveals, “I love to cook, I love to throw parties (my friends call me Martha when I plan a party) and I LOVE to save money. I have three dogs.  I live in Los Angeles.”

While apparently the only thing I have in common with Danny appears to be owning 3 dogs in La La Land (no one has ever called me Martha and I’ll likely never be accused of being frugal) if did I host such a party, Pintauro just might be the salesman I’d call.

According to IMDB, Danny starred in the horror film Cujo and TV staple Who’s the Boss (costarring Tony Danza,  Alyssa Milano and Judith Light), which ended in 1992.  He appeared in a 2010 episode of The Secret Life of an American Teenager and in the 2007 low-budget independent film The Still Life (which coincidentally Hubby Russell consulted on as a favor to our realtor’s son – a first time film maker).

I suggest following Danny on facebook and the next time you need to buy some tupperware, consider showing a former child star some love!