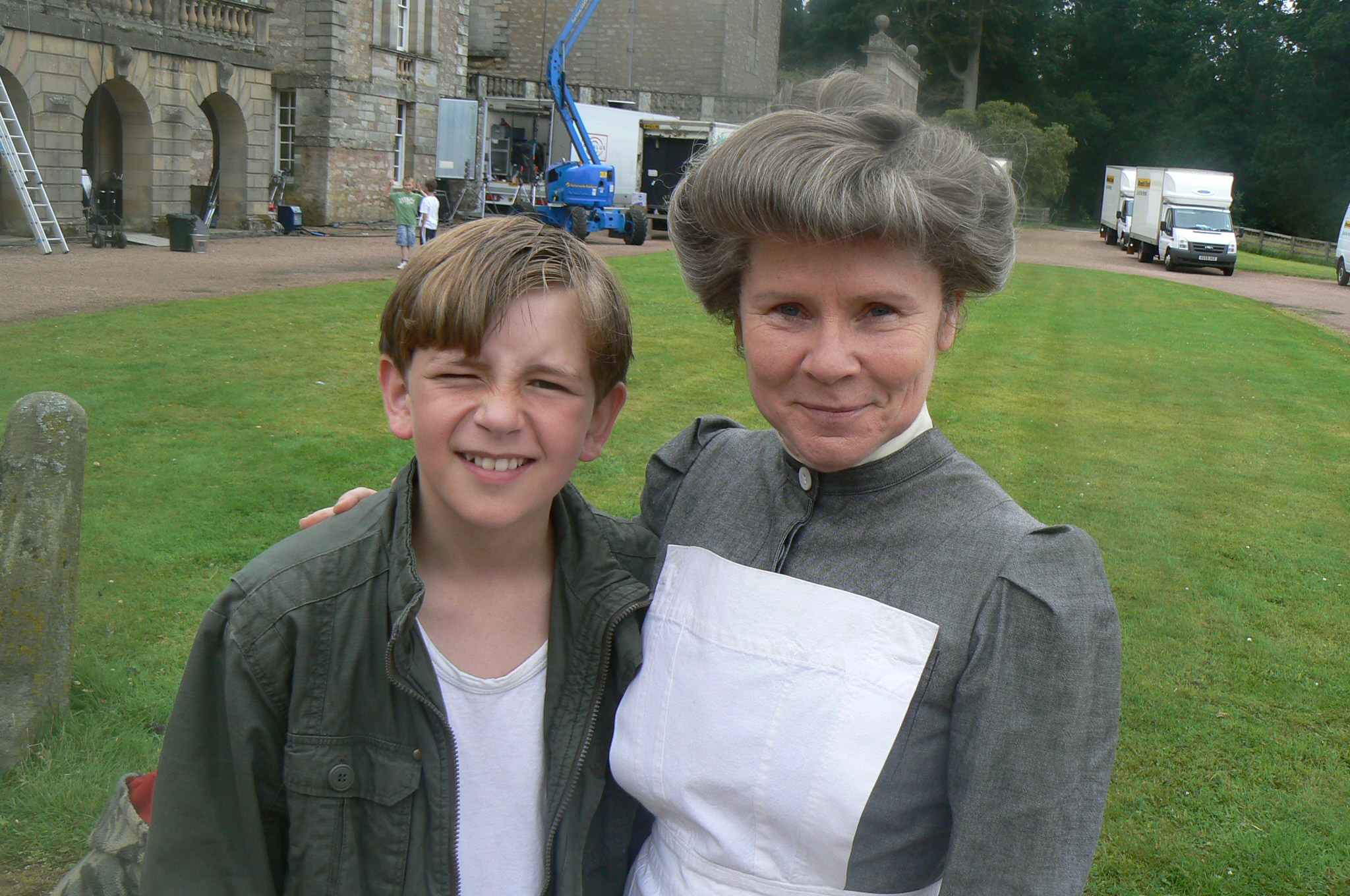 UK Child Star Felix Soper with Amanda Staunton on the set of “The Awakening.”

Following in my footsteps..
…or how Wendy Craig taught me to yawn

The entreaty of German playwright Goethe that “to accept good advice is but to increase one’s ability” has a special resonance for a child who is beginning to learn how to act.

It’s one of the unique delights of doing this kind of thing that your offspring can find themselves sharing a screen with some pretty big names who really know their onions and, sometimes, they’re happy to pass on a piece of their accumulated wisdom.

For Felix some words from the inimitable John Shrapnel about how to appear properly panicked in a scene in his first feature film, The Awakening, have stayed with him. 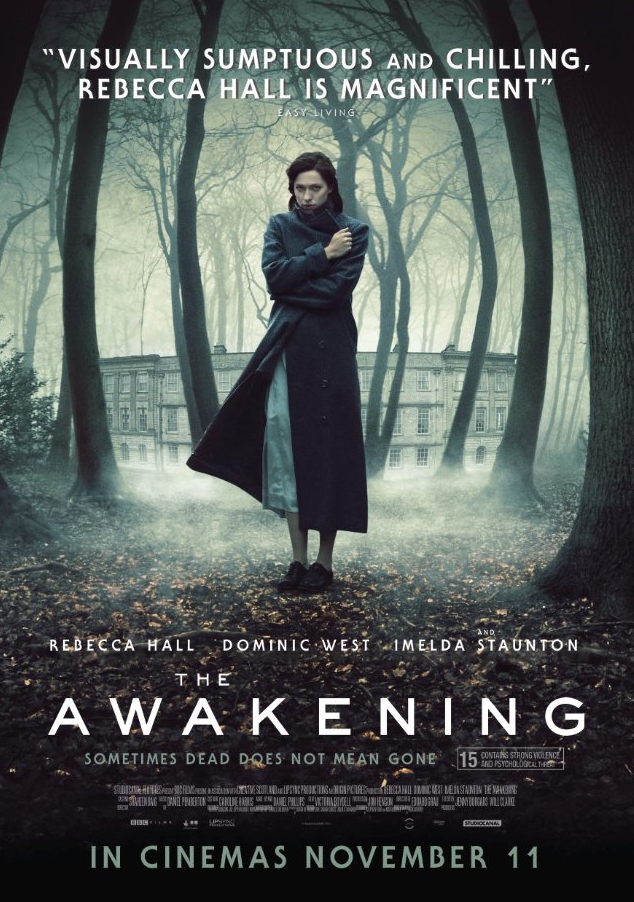 And one nugget of advice has remained with me too, almost 30 years after I last acted – how to yawn on screen as instructed by beloved British actress Wendy Craig.

We were filming for the TV series Nanny (a classic BBC Sunday night drama) in a church and my character was supposed to have been up all night looking after a fox (another unusual bonus of getting embroiled in these shenanigans as a youngster is you find yourself having to get friendly with foxes one minute or learning to ride side saddle on Rotten Row the next) and halfway through the scene I was required to yawn.

The moment came and I delivered the classic cliché, stretching my arms as far as they would go with an accompanying mouth movement resembling nothing so much as a python dislocating its jaw so as to swallow a sizeable piece of prey.

After the first take Wendy, in the nicest possible way, broke it to me that my fake yawn was precisely that: fake.

“Have you ever actually seen anyone yawn like that in real life? Think about it that way,” she counselled. So for the next go the python was banished and my pared-down version passed muster and survived the edit.

I often see the snake-mouth-arm-stretch-yawn combo on screen and that simple but effective advice comes back to me and I hope Felix will similarly recall the words of wisdom to which he has been privy.

It’s one of many parallels between our experiences but there are differences too.

Whenever I got a part a chaperone would rock up at our house in London at the appointed time, whisk me off in their car to somewhere or other for a couple of weeks and my parents never seemed to bat an eyelid.

In contrast, Felix is mainly chaperoned by my dad, who has been CRB’ed to within an inch of his life so he can look after his own grandson and even boasts a rather flashy laminated card showing he is endorsed by our local council so to do. 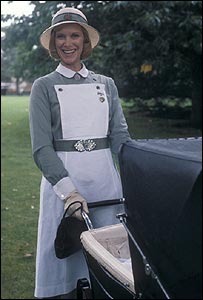 On the other hand I had a succession of chaperones; from the wonderful to the downright weird, like the lady who I now realise, looking back with an adult perspective, was spending most of her time hell-bent on copping off with the unit coach driver and the one my parents were convinced was pocketing more than her fair share of my per diems.

But the nicest of them all was Wendy Fletcher. She knew a thing or two about children who act, having a trio of sons doing just that, among them Dexter Fletcher, a connection extremely impressive to the 10-year-old me because he had been Baby Face in Bugsy Malone. He is one of those rare creatures: the child actor who makes the tricky transition to successfully forge an adult career. He recently directed his first film, Wild Bill.

His mum was lovely and as well as taking really good care of me she must also take responsibility for introducing me to the music of Barry Manilow. It only takes a snippet of ‘Mandy’ and I’m back in 1981, in Wendy’s car on a motorway somewhere between London and Birmingham in a savage rainstorm so severe we couldn’t see even a foot ahead – but there was Barry on the stereo, providing his particular brand of crooning consolation until we made it safely to Pebble Mill.

I’ve written in the past about the look I’m often given when people initially find out what Felix spends a relatively small percentage of his time doing.

And sometimes there is an entirely separate, additional look when people discover I, too, acted as a nipper. It seems to be taken as irrefutable evidence that I am now pushing him in the same direction in a textbook display of vicarious living.

But it’s precisely because I did it only in my youth – and my mortgage payment didn’t depend on my success at any meeting – that I look back on it with such fondness.

I have lovely memories of that time, not to mention some spectacularly minuscule residuals when stuff I appeared in surfaces periodically on some obscure channel on the other side of the globe.

It was fun, it was exciting, and as well as learning to deal with vulpine vagaries and getting the hang of side saddle there was also the privilege of acting with such luminaries as Dame Celia Johnson and Noel Coward’s muse, Judy Campbell.

It remains to be seen whether Felix will turn out to be a Dexter Fletcher – a child who starts acting and never stops – or if he’ll be like me and look back on it as a fantastic part of his being a kid – something to tell the grandchildren or to pep up a university application.

And, if there is any element of vicariousness I’m willing to hold my hands up to, it is simply the pleasure which lies in seeing him enjoy the singularly thrilling childhood experience that acting can be.

A version of this piece appeared on the Spotlight website www.spotlight.com

By Hollywood Mom|2020-05-03T23:34:08-07:00June 15th, 2012|Categories: From the Momager Trenches, Parents of Child Actors, THE BUZZ|Tags: Acting, CHILD ACTORS, young actors|Comments Off on From The Momager Trenches UK: Following in My Footsteps (Like Mother, Like Son)