UPDATE: “The surgery today went very well,” Max’s surgeon, Dr. Vaughn Starnes, says in a statement posted online by Children’s Hospital Los Angeles. “We went in to replace his pulmonary valve, which we did without incident. Max is in the cardiac ICU and recovering very well.”  Max is expected to be in the hospital another three days or so.

This article was written by LYNNETTE HINTZE, Features Editor of The Daily Inter Lake, both of whom have generously allowed HMB to reprint this article for our readership:

Max Page, the 7-year-old who won acclaim playing a mini-Darth Vader last year in Volkswagen’s Super Bowl commercial, is summoning some super power of his own to undergo open heart surgery in Los Angeles on Thursday.

A child actor since age 3, Max was born with a congenital heart defect and the surgery will replace his pulmonary valve and fix a hole in his heart. 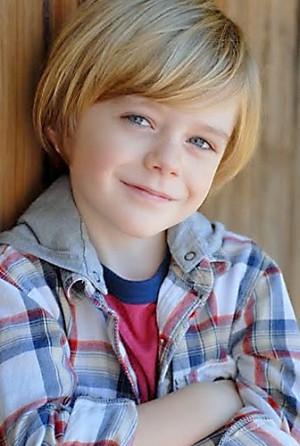 The Aldersons (of Whitefish Montana) are traveling to Los Angeles to be with Max and his family during the surgery that will confine him to an intensive-care unit for about five days.

Deutsch L.A., the advertising agency that hired Max for the Super Bowl commercial featuring the 2012 Passat, shared an email from Max’s mother Jennifer Alderson Page about the upcoming surgery.

“Initially, Max was crying and repeating how scared he was. We unpeeled the layers by asking what exactly he was afraid of and tackled each issue as he could verbalize it,” Page said in the email. “Blood draws, spending the night in the hospital and hurting are the big three. He was also very sad that summer would be in recovery instead of playing baseball, golf and traveling. Around bedtime he asked if I would stay up with him and talk. He wanted to make a ‘can do’ list. So we wrote out all the things he can do so he could focus on those.”

As Max contemplated the operation, he later told his mother: “Mom, I don’t have a choice. I have to go through it. I don’t like it and it’s still scary — but I have to. So I think I might as well go through it with a good attitude.”

Max’s “can do” attitude isn’t surprising, given his advocacy work for the Children’s Hospital of Los Angeles, where he helps raise money for other children with heart conditions.

When the Children’s Hospital recently cut the ribbon on a new $90 million wing, Max helped with the ceremony.

“Ironically, that’s where he’ll have the surgery,” Alderson said.

Last summer, when Max learned the federal government was planning to drastically cut funding for graduate medical education programs, his family arranged a trip to Washington, D.C., where he lobbied seven senators on both sides of the political aisle.

“He gets tired easily,” he said. “The doctors say it’s like having to wear a backpack every day. They knew at some point he’d need a [new] valve.”

Max already has endured seven other surgeries related to the heart condition.

“He’s going at it with a good attitude,” Alderson said. “You hate to put the burden of being a role model [on a young child] but if the other children at the hospital can see how he’s dealing with it,” it may inspire and help them.

Max has assembled an impressive resume for a 7-year-old. He’s had an ongoing role on the CBS soap opera, “The Young and the Restless.”

He also has appeared on ABC’s “Jimmy Kimmel Live” and played a basketball player on the Disney Channel’s “Special Agent OSO.”

Max has been in numerous theater productions in the San Clemente, Calif. area. Most recently he’s acted in commercials for Ore-Ida potatoes and Kay Jewelers, Alderson said.

The Volkswagen Passat commercial during last year’s Super Bowl became one of the most talked-about TV spots during Super Bowl week. Prior to game day, the 30-second spot went viral, with more than 53 million hits on YouTube.

In the popular commercial, Max is dressed as Darth Vader and is shown trying to get his super powers. Darth Vader is the central character and proponent of the dark side of “The Force” in George Lucas’ “Star Wars” saga.

Max’s mother concluded in her email, “as we hop on Max’s coattails to go on this ride — we too, shall do it with a good attitude. Though we will still tremble with tears and have our overwhelming moments — we will focus on the ‘can do.’”

She added a line Max uses when he speaks to children’s groups: “Kids, if you use your FORCE and dream big, you can achieve anything. We may be small — but we’re mighty!”

Learn More about Children’s Hospital Los Angeles and how YOU can give back here. Follow them on twitter.