You are here:Home-Hollywood Happenings, THE BUZZ, THE HOLLYWOOD LIFE-Hollywood Mom Blog Parties with Elmo & Curious George at the PBS SoCal Launch Party at Jim Henson Studios
Previous Next 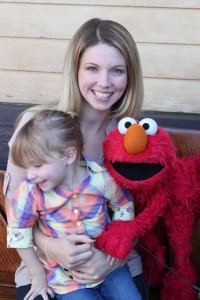 On this beautiful, January day in Hollywood, my daughter Shelby and I had the pleasure of lunching with one of the most fabulous, endearing, furry celebrities in town… that’s right, Elmo himself!  Hollywood Mom Blog was invited to the Jim Henson Company Studiosto celebrate the launch of PBS SoCal and all of the most fabulous stars were in attendance – Elmo from Sesame Street, Curious George, Sid of Sid the Science Kid, Buddy from Dinosaur Train, and Martha from Martha Speaks.

Once upon a time I dreamt of spending lazy afternoons poolside at the Chateau Marmont with hotshots from the Hollywood “It list.”  Now that I’m a mom, I’ve traded in my celebrity meet ‘n greet wish list for the company of life-size, plush characters. Sigh. I suppose I should appreciate it while it lasts because in a few short years, my 3 year-old daughter Shelby will be a tween and we’ll most likely be attending boy-band concerts and chasing down the Hannah Montana of the moment.  In any event, Shelby was thrilled to meet her favorite PBS television characters and this will be a day that we can both look back on with a smile. 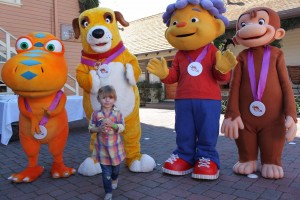 KOCE has taken over as the top PBS station in Southern California and is now called PBS SoCal, and to celebrate the transition from KOCE-TV to PBS SoCal, Mel Rogers (President of PBS SoCal) and Lisa Henson (CEO of the Jim Henson Company) gathered all of our favorite characters from the PBS KIDS show roster for a performance, lunch and tons of fun.

PBS SoCal serves the Los Angeles, Orange, Ventura and San Bernardino Counties in California with entertaining educational programming and award-winning children’s shows like Sesame Street, Sid the Science Kid and Dinosaur Train. Shelby just loved being having her picture taken with her favorite monkey, Curious George, and this mama was thrilled at the chance to be photographed with the one and only Elmo and puppeteer Kevin Clash. I mean really… who doesn’t love Elmo?! Even celebrity mom Megyn Price brought her daughter out to join the festivities!

Hollywood Mom Blog would like to thank PBS SoCal for including us in such a fun-filled afternoon at the Jim Henson Studios. Our readers and their kidlets will definitely be tuning into PBS SoCal for all of their beloved children’s shows!

HMB Writer/Reviewer Michele Dahl is mom of pint-sized models Shelby and Cash Dahl. You can follow her on Twitter too at @Elle_Renee 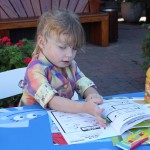 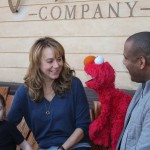 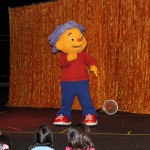