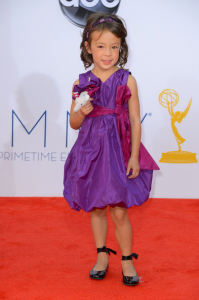 When asked by the Huffington Post who the biggest Diva on the “Modern Family” set is, Jesse Tyler Ferguson lovingly outed Aubrey Anderson-Emmons, the 5-year-old actress who portrays Ferguson and Eric Stonestreet’s adopted daughter Lily.

“I love it so much because, since she’s a 5-year-old, she says what I’m thinking. Like, if a scene is taking too long to shoot, she will literally say, ‘I’m tired of doing this scene,'” says Ferguson. “She’ll say exactly what I’m thinking. I love watching her learn about how TV works. She makes me laugh. Because I’m still figuring it all out and I still have a ton of questions. But she’s never afraid of asking questions, like “Why do we have to do so many things so many times?” It’s really fun to watch.

IMDB reports that Anderson-Emmons is represented by Carlyne Garger at Dramatic Artists Agency.