You are here:Home-Auditions, Hollywood Happenings, Success Stories, THE HOLLYWOOD LIFE-Julia Roberts Initial Rejection by Hollywood Bigwigs Serves as Inspiration For a New Generation of Actors
Previous Next

Julia Roberts with niece Emma at the premiere of their film, "Valentine's Day"

International movie star Julia Roberts (and auntie to teen star Emma Roberts, pictured left) apparently struggled to be noticed by Hollywood agents when she was starting out as an actress because they labeled her “too trailer park.” The 41-year-old actress was first seen in “Mystic Pizza” and became a household name playing a prostitute in Pretty Woman, opposite Richard Gere.

“The Cult of Celebrity,” a tell-all book reveals that  Roberts’ promising talent was lost on even Hollywood’s biggest talent bookers back in earlier years. Robert Attermann, VP and Managing Director of Abrams Artists Agency admits to Cult author Cooper Lawrence  that the agency made the mistake of passing on Julia, as well a handful of other future stars. According to Attermann, “Julia Roberts came in years ago, and the commercial agent who met with her at the time said, ‘Nah, she’s too trailer park’.  As a matter of fact, when we moved offices, we were going through old rejection files, and in there was Annette Bening, Robin Givens, Julia Roberts and a couple of others.” 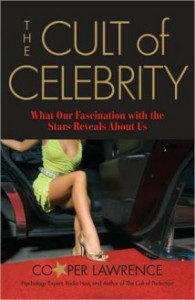 Can you believe this?  Arguably one of the strongest female actress at the box office over the last two decades and she was considered a “pass” by some of the top agents in the business.  It just goes to show that internal fortitude and perseverance are key in this business. I hope this uplifting story inspires you and your child today and especially on those days when rejection comes calling.

“The Cult of Celebrity” by Cooper Lawrence addresses the phenomena of today’s preteens, teens and twenty-somethings aspiring to celebrity. Our culture more often than not emphasizes the external, the superficial and the importance of fame. As a result young people are increasingly more  driven towards it as any humiliating reality television show (Jersey Shore, The Hills, My Sweet Sixteen) will prove.  Some young people falsely believe celebrity status or being “discovered” is the magic fairy dust needed for “happily ever after.”  Author Cooper Lawrence addresses the specific issue of young girls and celebrity and provides tips and hints for parents to provide positive parenting.