You are here:Home-CHILD ACTORS, Screenings, Parties & Union Events, THE BUZZ-SAG Young Performers Know How to Party!
Previous Next

With a mini-disco ball spinning and the dj playing fan favorites, the first floor was turned into a fun zone.  I love SAG events!  The ones I’ve attended in the past have been very informative and educational, because of my daughter’s age, I usually get more out of them than she does.  The free carnival was right up her alley.

Each SAG department, Legal, Stunts and Safety, Credit Union, etc. hosted a booth where kids played carnival games like ring toss or bean bag toss and win a little prize.  Parents were given brochures and flyers to learn more about the departments within the Screen Actors Guild.  There were also cotton candy and popcorn stands, a Wii lounge and a photo booth.  Kortney revisited the photo booth several times; she has a thing for taking goofy pictures. 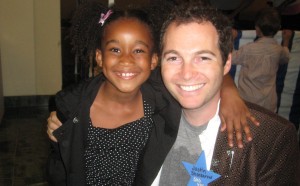 As a parent, I thought it was a great way to connect with the organization. So often, we don’t take full advantage of the different opportunities or educational tools they offer because we forget or we’re not aware of them.  It was nice to be able to put faces to the departments and learn what they have to offer.  I’m really excited about the Looking Ahead program.  Looking Ahead is part of The Actors’ Fund of America. They sponsor workshops and outings to help young performers and their families connect and to navigate the issues associated with a minor working in the entertainment industry.

Computers were set up in the lobby so everyone could surf the new site.   It’s very hip and interactive.  Kortney has been in the business since she was a baby and attending events like these helps her to put things in perspective in terms of the larger picture.  Of course, what would be a SAG event without star sightings?  We saw Robbie Amell from True Jackson VP coming in as we were headed out.