UPDATE: In October 2009 former child actress Lindsay Lohan’s momager, Dina Lohan made headlines with the announcement that she was partnering up with Long Island-based shoe company Lovemyshoes.com to launch (and become the national spokesperson for) her very own footwear line called “Shoe-Han” which was slated to be ready by Mother’s Day 2010. According to PopTarts, the deal has fallen through just months before the scheduled debut.

From a rep of Love My Shoes: Love My Shoes regrets to announce we are not moving forward with the Dina Lohan line of shoes at this time due to continued economic sluggishness and the prevalent mood of today’s shoppers. Love My Shoes and its President, Robert Yeganeh, wish Dina continued success in all her projects.”

But according to a rep for Lohan’s shoes, the star mom is still determined to accessorize the country’s feet. “There was a miscommunication over finances, this was too local and we need a larger partner,” said the rep. “We are currently exploring other options, and we will have another announcement soon.” 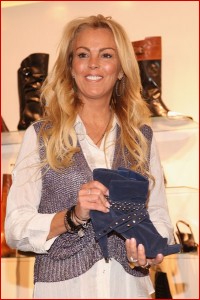 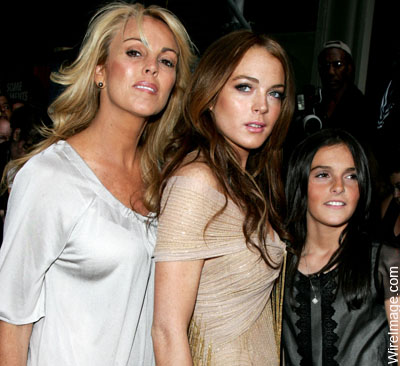 October 8, 2009 Los Angeles: Dina Lohan, controversial momager of former child actress Lindsay Lohan, held a press conference today at Trump Plaza in New York to announce the launch of her own shoe line, to be called “Shoe-Han.”  The momager of 4 will also become the national spokes person for LoveMyShoes.com a chain of Long Island ladies footwear stores. LoveMyShoes.com will stock Dina’s shoes which be available worldwide Mother’s Day (or Momagers Day as we call it here in Hollywood). Dina will make appearances as a shoe aficianado on both TV and radio commercials later this month.

“I’ve always loved shoes,” says Dina. “I think it stems from when I went to private school and had to wear a uniform; the only thing I could feel stylish about were my shoes.”

With all of her namesake shoes costing less than $100, Dina states: “These shoes are affordable, which is really important in this economy.  It’s tough for everybody – even us.” 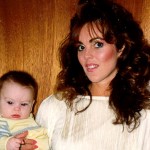 The official press release below:

Date: 2009/10/7 at 17:01
Subject: DINA LOHAN, ONE OF THE WORLD’S MOST FAMOUS MOTHERS TO ANNOUNCE HER OWN DESIGNER SHOELINE ”SHOE-HAN” AND BECOME NATIONAL SPOKESMODEL AT NEWS CONFERENCE ON THURS OCT 8TH-2pm NYC

DINA LOHAN, ONE OF THE WORLD’S MOST FAMOUS MOTHERS TO ANNOUNCE HER OWN  DESIGNER SHOELINE ”SHOE-HAN” AND BECOME NATIONAL SPOKESMODEL AT NEWS CONFERENCE ON THURS OCT 8TH-2pm NYC

Dina Lohan, diva and star of the hit E! show “Living Lohan,” as well as  mother to actress and starlet Lindsay, will be holding a major press conference and media reception on Thursday October, 8th at 2pm at Trump Plaza, 725 5th Avenue, Floor 21, Marc Fisher showroom, to announce a creation of  her new own shoe line, “Shoe-han” as well as becoming a  national spokesmodel for the popular LoveMyShoes.com retail designer ladies footwear stores.

LoveMyShoes.com hopes to have Dina’s shoes available world-wide from coast to coast by Mother’s Day. She will be appearing as a shoe fashionista later this on month on television and radio commercials. The shoe store chain was founded on Long Island, home of the Lohan family.