And as a bonus School of Rock Burbank would like to offer the following readers 50% off the camp of their choice:
Reader Sharon Prelesnik
Reader Fenella
Reader Kami

Thank you to all who entered and thank you to SCHOOL OF ROCK Burbank for sponsoring this awesome giveaway!

This summer School of Rock Burbank hosts Summer Camps such as a “Drummagedon” Camp, Ukulele camp, a Pop Rock Vocal camp for the singers out there and even a Blues + Jazz camp an more! Check out their complete camp listings HERE.

During summer camp, kids will spend their day jamming out, learning swell-known rock music on the instrument of their choice! Campers are encouraged to explore each instrument to determine what they really love playing! By the end of the first camp week, they’ve got such mad skills that they go on stage to perform what they have learned throughout the week! Each camp is led by two Camp Directors. SOR instructors live to play and play to live. They are all active in the music industry; teachers by day and rock stars by night! 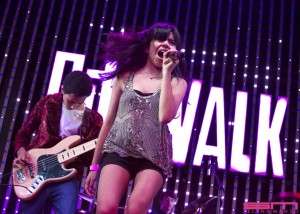 Keep Reading! THREE children of HMB Readers will be selected to enjoy a FREE WEEK OF CAMP. YES THREE!

School of Rock, the largest music program in the US, is a performance-based music education school first established in 1998. School of Rock has grown into a huge community of 17,000 plus students, in more than 156 schools worldwide. Thousands of children across the country are taking the stage, participating in SOR Summer Camps, Guest Professor Events, and Performance Programs.

School of Rock Summer Camp provides so many opportunities for kids:

* Confidence building among their peers and in front of crowds
* Ability to perform in legendary rock venues
* Life-long friendships
* An exhilarating educational experience!

ABOUT
School of Rock (SOR) operates year round, offering a variety of programs. During the school year, they function as a music program for home-schooled children and as an after-school music program, and during summer, winter and spring breaks, they offer week long day camps for intensive instruction, culminating with, of course, a show for their friends and family!

School of Rock changes lives, one child at a time and SOR Burbank owners, Dana and Dale Hesse, were able to experience first-hand how School of Rock betters children’s lives. Driving past the music school one day, they noticed a sign for Summer Camps and signed up their daughter, Ani, to attend. The Hesse’s were amazed by the enthusiasm the young students had performing together. Their daughter was having a blast at camp and continued on for three additional weeks! The School of Rock classes helped her open up in an entirely new way. It wasn’t just Ani’s experience that amazed them. They watched kids pick up an instrument for the first time and perform in front a crowd just a week later. This inspired them to search for a School of Rock location they could purchase and run themselves. They’ve owned School of Rock Burbank since March 2014 and have launched group classes for every age group, picked up gigs at NAMM, Universal CityWalk, Hard Rock Cafe, Long Beach Progressive Motorcycle Show, the Whisky A Go-Go and even got Zakk Wylde to come rock out with the school!

WANT YOUR KID TO HAVE A WEEK OF SUMMER CAMP? FOR FREE? Then follow SOR Burbank on social media(listed below), and tell us in the comment section 1) which camp your child would like to join School of Rock’s Summer Camp and 2) why they should win a Free Week of Summer Camp!!

School of Rock Burbank will also honor $25 off any monthly group class as long as they mention the word: ROCKERMOM *Valid​ only​ for the remaining month of May​.​