As Hollywood Moms raising working child actors we all know and admire Jen Rudin, CSA of Jen Rudin Casting and most of you probably follow her on facebook and twitter devouring those morsels of wisdom she regularly tosses out into the stratosphere.

For those unfamiliar with Jen, she served as Director of Casting and Talent Development for Disney Theatrical Productions in New York City from 2007 through 2009. Prior to that, she was head of casting for Walt Disney Animation Studios in Burbank and even won the 2006 Artios Award for casting Chicken Little and won again in 2010 for The Princess and the Frog. She has also cast hundreds of national television commercials; including the famous “Can you hear me now?” campaign for Verizon. 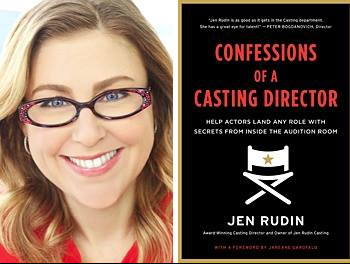 When I received Jen’s book “Confessions of a Casting Director,” several months ago I placed it prominently in my inbox and promised myself I’d read it when time allowed. Unfortunately that moment didn’t arise until a recent plane flight to San Francisco. Once I cracked the cover, I finished the book in just a few hours (it’s an easy, funny, and informational read) and I kick myself for not taking advantage of Rudin’s casting wisdom when it first arrived on my doorstep.

Michelle Barrett Gower: How important is a printed resume? Should the resume only list higher profile gigs, especially when it gets longer than a page?

JEN RUDIN: The resume should only be one page and yes, printed and stapled to the resume picture.

Keily White: What should I list on my kids resume if she’s only done Print and commercials?

JEN RUDIN: That’s fine to list. Any school or church plays are fine to list too. Also list local dance classes etc. It’s okay if the resume is short when they are starting out. Don’t worry, it will increase!

Michelle Barrett Gower: Is background beneficial for younger kids as a precursor to featured jobs?

JEN RUDIN: It’s always great to spend time on a set to learn what it’s like. But it’s not a precursor.

Elizabeth Paddock: What goes into your decision as to whether or not you will accept taped auditions? If you do accept them, what makes a taped audition stand out?

JEN RUDIN: It depends on how much time there is to cast the role. these days taped auditions are accepted a lot. a great taped audition stands out when the child is memorized and shows personality in the tape. Also, get an affordable tripod!

Tracy Leeward Kuipers: Do you really view all the audition tapes that come in esp from smaller , non-LA markets?

JEN RUDIN: Depends on how much time we have. I try to look at all tapes.

Lisa Pitts: Do you bring in kids from workshops?

JEN RUDIN: Always! Workshops are a great chance for me to meet and spend time with a kid for a longer amount of time than just a quick audition.

Caroline Mangan Gerasimovich: When a scene calls for “sobbing” or “crying” how important is it for you to see real tears and full-on crying vs. portraying sad with no crying? Does it matter either way?

JEN RUDIN: No need to cry on cue. I would rather see that the child can experience a moment of sadness on camera.

Carrie Liddell: Do you go by the child’s look, or the actual age of the child when choosing who to bring in for auditions?

JEN RUDIN: It really depends on the role.

Sandra Grandt Berney: Do “self taped” auditions REALLY get the same opportunity as “in person” auditions? Or do you only look at them if you haven’t found anyone in the in person auditions?

JEN RUDIN:  In person is always better, but self tapes are a great first step. A good self tape can lead to an in-person callback!