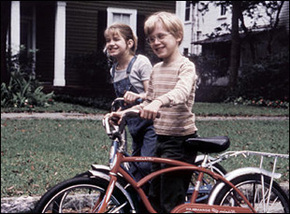 You’ll likely recall Anna Chlumsky as the adorable 11 year old star of “My Girl,” it’s sequel and “Gold Diggers.”  She is now 29-years-old, and after years off from acting, has resurfaced on both the small screen (with appearances on “30 Rock” and last year’s “Cupid”) and large (the Oscar-nominated “In the Loop”).

Next up for her romantic dramedy “The Good Guy,” starring Alexis Bledel as an urban conservationist in Manhattan torn between two Wall Street traders (Scott Porter and Bryan Greenberg).  In a brief but memorable supporting role, Chlumsky plays one of Bledel’s upwardly mobile friends.  Below are excerpts of a recent interview she did with Aaron Hillis of IFC.com

Anybody who writes about you always feels the need to use the phrase “former child actor.” As an adult who still acts, do you feel there’s a stigma to that term?

I certainly do, but you just have to embrace what you can’t control. How am I going to control how people refer to me? I used to be an editor, I considered journalism — and even more marginalized, entertainment journalism. It has its own rules and style. The first thing that I think journalists do, and you can tell me this or not, is to remind people exactly what they would know this person from. So it’s just another variable: “Oh, we can stick that one in there so people can put her in context.” I learned not to take it personally that people still want me to be ten years old. [laughs]

Beginning in the late ’90s, you were jaded enough to take several years off from acting, went to college and pursued a career in publishing. What ultimately brought you back into performing?

Going back to school didn’t have to do with the jaded parts. [laughs] I always loved learning and was enamored with the idea of higher education, so college was always the plan. School allowed me to see what my strengths were other than the things I’d been told my whole life: “Oh, you’re cute. You say these lines and take direction well.” That’s all you need as a kid to be an actor, because all the truth is already there. It’s not about what [making movies] is really about: being creative, telling stories and collaboration. That’s what I love about it now, but as a kid, it was about making sure people like you. That’s what we discover at the end of adolescence, that it’s okay if people don’t like us. [laughs]

So I was disenchanted with the idea of having my major goal to be on the cover of a magazine when I’m having so much fun learning about Hobbes. Everything got re-prioritized for me. Once I was out of school, I was pursuing anything that I had interest in except for movies and theater, even though those are the things that I have the most interest in. I was squashing it down because I didn’t want to admit it. Slowly, I started to discover that this could be a beautiful thing if I follow the beauty of it, as opposed to… I don’t know, schlock. Honestly, recognition is beautiful but that’s not what I’m in it for. For me, it’s to tell stories, and I love doing it that way. So that was the journey. I’m so loquacious, pardon me. [laughs]

How have you gone about approaching your career in this way?

It’s something I learned in my time away from it, especially being an editor. I was on the business end [of publishing], the buying and selling end of a creative industry. Here are these people putting their hearts on the page, and I had to say “Eh, can we sell it?” I learned, when I became the person putting my heart on the page again, that it’s not personal. If I don’t get a role that I really want, it’s not because I suck, or I’m ugly, or they think I’m stupid. It’s just because they had one little role and all these people. That’s my antidote to rejection. You can’t blame people for having to make a buck, and the buck pays artists, so how can that be bad? So the sting isn’t there. I know I’m good at what I do, as long as I put my work in.

I read that you had a stint during college as a Zagat guide fact-checker. What was the strangest experience you had in that position?

That wasn’t even in college — that was my entry-level position, which got me to New York. I put so much of it out of my memory. It was a cut above telemarketing, for sure. It was three of us in a little room with no windows that we called the “War Room,” where we just made all these cold calls to restaurants. We were bored, obviously, so there got to be one point where we started singing the theme to “Law & Order” incessantly. We couldn’t stop. Every call we finished, we’d go, “Duh-duh, duh-duh-duh-duh-duuuuh” to the point where we then looked up who the composer was — Mike Post is his name. We printed his face out and put it on our wall. He became our mascot so we could get through the day. So that’s kind of odd — tt’s very Zagat ’02. [laughs] 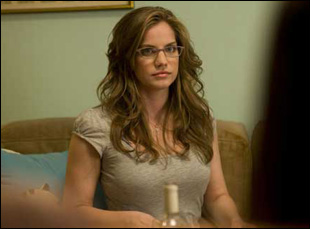