You are here:Home-THE BUZZ-Cameron Diaz Tells Young Actors, “Work Your Ass Off!”
Previous Next

Last week it was her ex-beau and former child star Justin Timberlake offering child actor advice, and this week, Bad Teacher star Cameron Diaz fires off her opinion on having a career in Hollywood, telling young actors, “You have to work for it!” 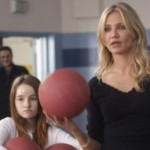 The actress, who has worked with talented child actors Abigail Breslin, Sofia Vassilieva, Matthew Evans, Kaitlyn Dever, Noah Munck and many others, shared with WENN that she’s tired of young talent who mistakenly think doors should be open to them and believes kids today expect fame to come too easily.   She told the media outlet, “From 33 years old and [younger], kids have no concept of what it is to work hard and, in the business we’re in, making movies, you get nowhere if you’re not willing to work your a** off because we work major hours. You need to work really hard to make a movie.”

On work ethic in the entertainment industry, Diaz stated, “It drives me so crazy when people don’t have a good work ethic. If you’re gonna be here, work your a** off.  There’s a handful [of young actors] that do have a work ethic and they stand out and they’re the ones that are gonna go far because the majority of kids just think that everything should just be handed to them; that they’re entitled to it.”  She did not mention any of the child actors whom she was referencing, by name.

Do you think she has a point? Does today’s generation of child actors expect too much? Are we raising a culture of entitled youth?