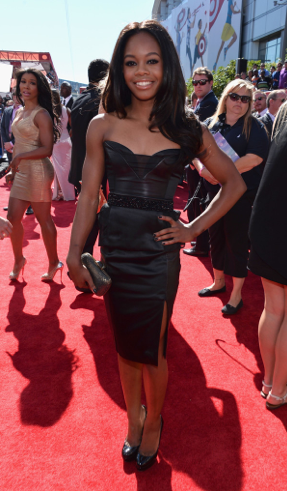 There was some “fierce” fashion flowing when young Olympic gymnasts Gabby Douglas, McKayla Maroney, Kyla Ross and Jordyn Wieber arrived at the 2013 ESPY Awards at the Nokia Theatre L.A. Live in LA on July 17, 2013.  As part of The Fierce Five℠, they were nominated for Best Team. Team member Aly Raisman did not attend.

My favorite look among the glam squad was Gabby Douglas who was in a black Izmaylova body-hugging leather dress that perfectly complemented her athletic physique.

McKayla looked like a Grecian goddess in a Saunder gold flowing dress from the S/S 2013 collection. She avoided any potential wardrobe malfunctions by pairing the ensemble with black shorts underneath. Her hair was pulled up into a loose bun to keep attention on her dress, somewhat resembling Pretty Little Liars star Ashley Benson.  And can I just say, I’m so glad she didn’t do any “McKayla’s Not Impressed” poses (none that I saw at least).

You can never go wrong with a Little Black Dress with cap sleeves like the one Kyla Ross chose. You can find one just like it from ABS by Allen Schwartz or if you prefer one with even more sparkle, grab the Heartloom option from Neiman Marcus.

Finally, we have Jordyn Wieber in a purple wrap dress with black shoulder panels. While I do like the dress on its own, I thought it was a little too mature and even business-like for a teen girl on the red carpet.

Although the group did not take home an ESPY for Best Team, they certainly shined as “Best Dressed Team” on the red carpet.

Who was your favorite among The Fierce Five℠? 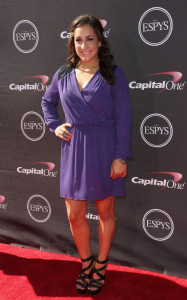 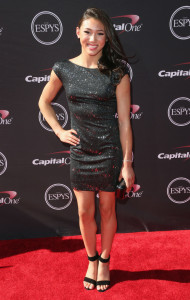 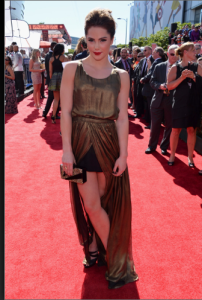