Child Star WILLOW SMITH Takes A Break From Acting, Wants to “Just Be 12”

You are here:Home-CHILD ACTORS, Child Stars, In the News, THE BUZZ-Child Star WILLOW SMITH Takes A Break From Acting, Wants to “Just Be 12”
Previous Next

Child Star WILLOW SMITH Takes A Break From Acting, Wants to “Just Be 12” 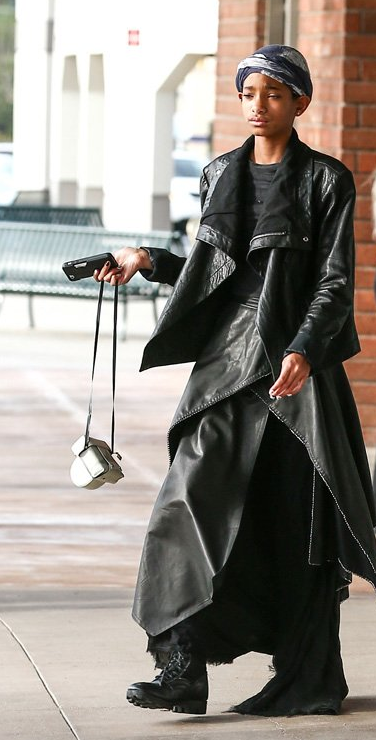 As most Hollywood Moms and Dads are aware, Annie, the Musical is being turned into a feature film by dynamic duo Will Smith and Jay-Z.  Will’s talented daughter, Willow Smith was pre-ordained to become an actress and most recently pegged to star as the lead in the Annie remake but now rumor is she’s “aged out” of the role. To anyone who’s seen her lately, it’s more like she “grew out” of the part, literally.

We ran into her at our local CVS over the holidays and this kid is T-A-L-L, runway model tall, and obviously going through a significant growth spurt. It’s tough to imagine her playing the well-known orphan at this juncture but she’s a talented child and could pull it off if she desired.

But as it turns out, Willow doesn’t have that desire. Entertainment Tonight reports that Willow made the choice to drop out of Annie, put a halt on auditions for movies and told her famous dad she wanted to experience a normal childhood.

While giving a speech at Temple University in Philadelphia, Will Smith stated:

“Willow was supposed to be doing Annie, we got Jay-Z to do the movie, got the studio to come in and Willow had such a difficult time on tour with Whip My Hair and she said, ‘You know Daddy, I don’t think so,’ and I said, ‘Baby, hold up!’ I said, ‘No, no, no, listen, you’ll be in New York with all of your friends and Beyoncé will be there. You will be singing and dancing,’ and she looked at me and said, ‘Daddy, I have a better idea, how about I just be 12?’

Kudos to Willow for knowing herself so well and for having the courage to speak up. No word yet on whether the show will go on without it’s first-pick lead, but we’re hoping for all the talented child actors out there that it does!

Willow Smith is represented by William Morris Endeavor across the board and managed by Overbrook Entertainment.